I imagine hence forth my life will now settle into two distinct eras: the time before I took my children back to school shopping last week and days following this fated venture. The thing is, I could lie, friends. I could say it was exhaustively draining, and I’m praising God that we crossed that beast off the list for 2016. But this would horrifically understate the cold, hard truth of what transpired in those Target aisles. Because you see, what happened is that my sanity died. 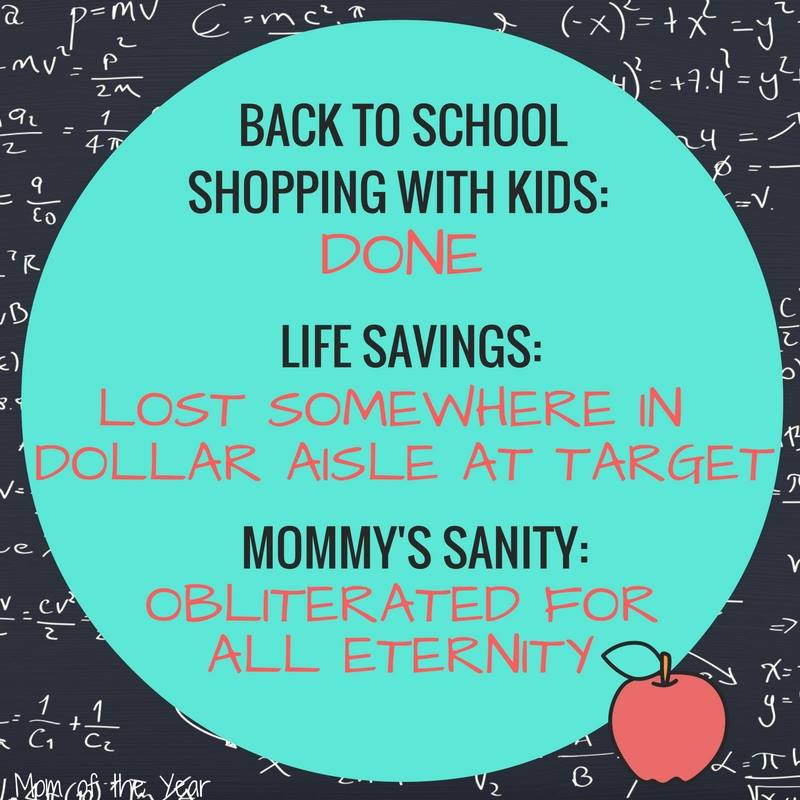 Up to this point, my sanity had been popping in and out, casually flirting with taking it’s leave as pieces of me died off in chunks–you know, after a particularly scarring homework fight or battle over how many bites of chicken nuggets one was required to eat at the dinner table. I never really believed my sanity would completely part ways.

But oh, how I underestimated the power of back to school shopping.

As a first-time mama of two in the school system, I ignorantly envisioned a light-hearted jaunt with my cherubs that would serve to get us all in the spirit of heading back to school. I carefully prepped a shopping list against class lists distributed by the teachers. I clipped coupons and affixed them with a brightly colored paper clip. I treated us all to a lunch out on our way and talked up the fun endlessly. In short, I was a magnificent idiot. 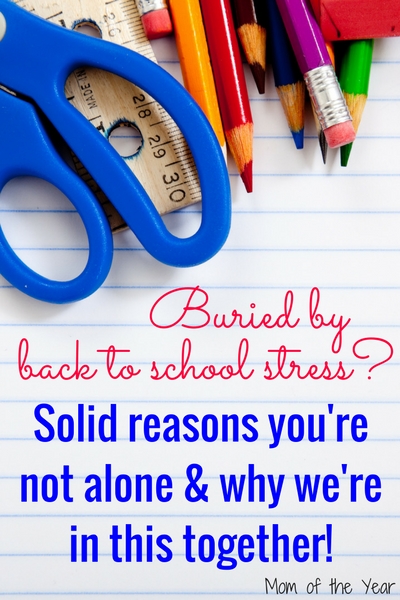 My first ghastly miscalculation came in the clothing section. The miscalculation being that we entered it. As I purchase all of my kiddos’ clothes solely at consignment sales, I thought it would be cute to allow them each to pick out one new outfit for the first day of school. It was not cute.

I can’t rightly recall what exactly took place, as after the first 16 times of screaming, “WHERE IS YOUR BROTHER?!” while scooping armfuls of My Little Pony tee-shirts out of the cart as fast as my daughter could toss them in, I entered a sort of panicky surreal fugue state. The details are fuzzy. At one point, I remember a pack of Angry Birds underwear flying over my head during an impassioned fight over why a neon glittered feather vest would not appropriately function as a skirt. Millions of dollars later, and more knee-high princess socks than one should ever rightly encounter in a lifetime, I rallied my spirit and forged stoically on to the school supply section.

Friends, this is the point where we should have jumped ship. When I should have grabbed my children, surrendered the cart, and made the brave choice to abandon the principle of schooling altogether. We could live very happily playing with dandelions in the pastoral foothills of some forgotten corner of the world where addition and subtraction have no purpose, I’m sure.

Yet as stated, I was in prize idiot mode.

I could say that I pushed on through the aisles, but this would be false, as the aisles were all rendered impassable, completely blocked by desperate mothers, excitable children, and inordinate quantities of Star Wars backpacks and 24 crayon packs. Surveying the scene, I made a solemn vow to shop for the next school year in June. More accurately stated, I would set up camp outside Target in early spring and wait for the first load of school supplies to be unpacked. I would then purchase ALL of it and park it in a UHaul outside my home so I could cover all my children’s class list needs without ever having to set foot in the store. The rental fee of the UHaul? Obviously worth it. 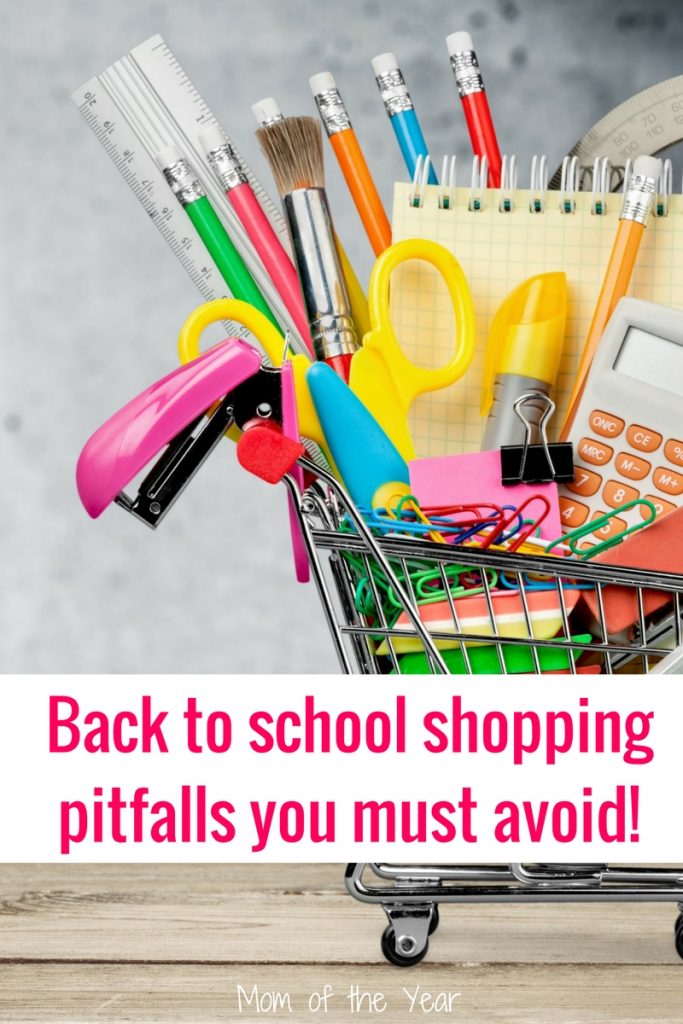 As I rained down silent curses on Target for failing to appropriately set up a self-service bar amidst the glue sticks while searching madly for the exact size of black and white marble composition notebook required by my son’s second grade teacher, I saw a fellow mom wildly grab at the nearest employee, “But do you carry this folder in orange?! I need it in red, blue, green, yellow and ORANGE!” I met her eye, placed my hand on her arm, and whispered, “I’m so sorry.” We silently nodded at each other in solidarity and pressed on.

Because that’s how a true warrior fights. With quiet perseverance and camaraderie with fellow soldiers. And most importantly, with a firm belief in the cause: if I properly gear my children off for school, I will get to send them to school. And what does this mean? I’ll get a whole 9 months of solitude to recover from the decimation of my soul that just transpired.

For perspective’s sake, this is what my dining room table looked like upon returning home from our ill-fated endeavor: 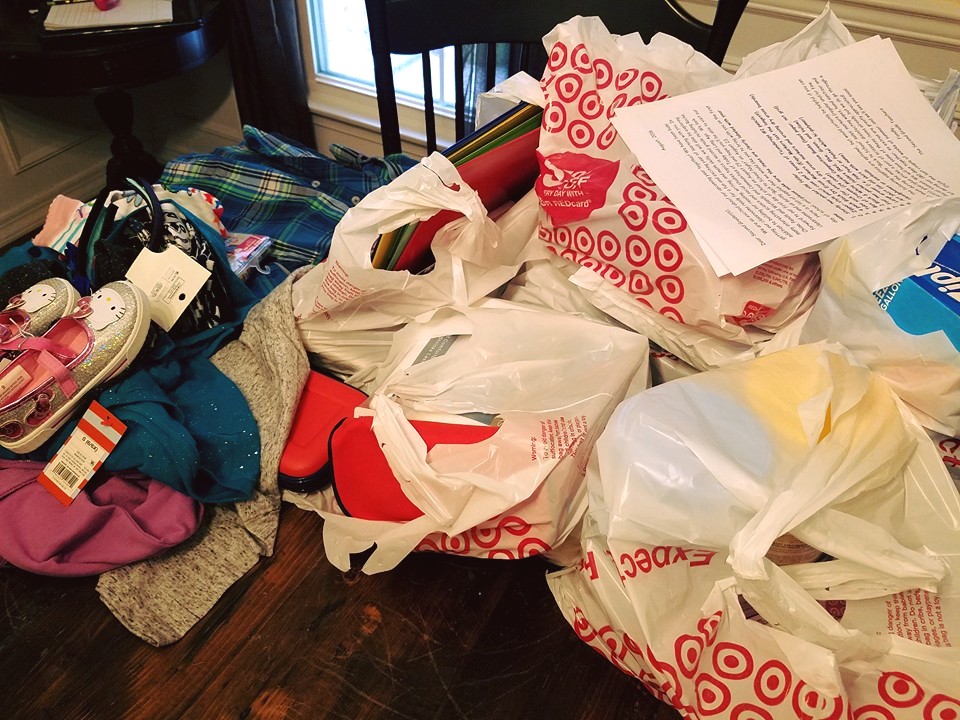 And this is what it looked like a week later:

And this is what it looked last night after I was brave enough to pull all the crap out of the bags: 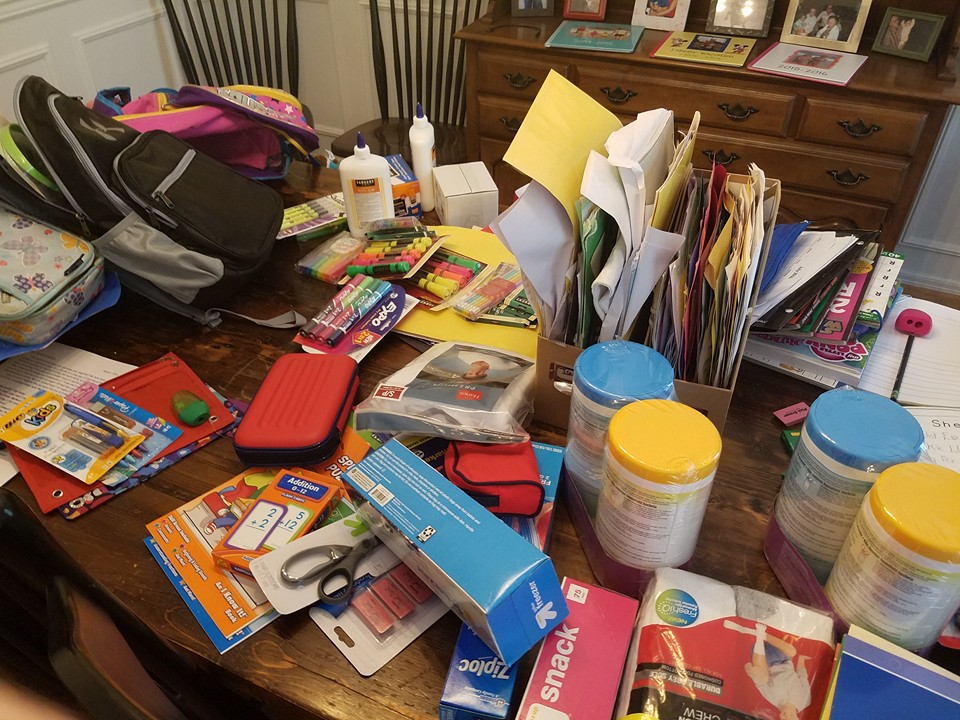 And this is precisely when I knew with absolute certainty…back to school shopping had WON.  Godspeed, my fellow warriors.