Please welcome Anne to The Mom of the Year team! I love her sweet, genuine spirit, and she is one of those souls on this earth who ACTUALLY ENJOYS CLEANING AND ORGANIZING. I know, incredible! She is also savvy with crafting and home decor projects and will be sharing all of these smarts with us. I’m thrilled to have Anne on the team! 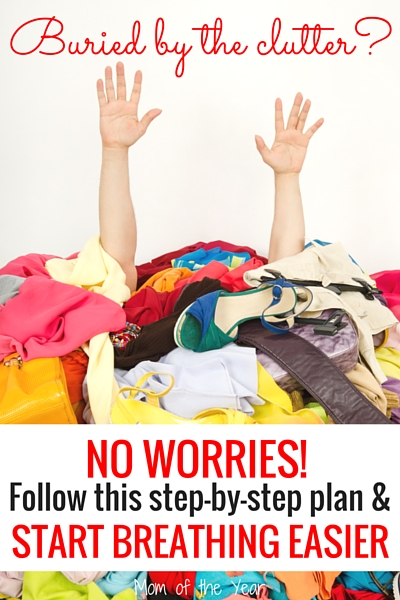 Spring is a great time for decluttering! Everything feels brighter and lighter and breezier and I want to translate that atmosphere into my home. And that means getting rid of stuff.

But with four little kids, this is no easy task.

I remember being in college and decluttering my dorm room. That took me what? An hour? I was only responsible for my own stuff. But now, I’m responsible for managing a house full of belongings for our family of six! It can seem overwhelming at times, but over the years, I’ve learned a few tips and tricks.

Below are the most common sources of clutter in my home (and maybe yours too) with suggestions on how to thin the piles of stuff and how to keep it from slowly creeping back!

What are the sources of clutter? What do you need to declutter?

Decluttering: Dump all your kids’ toys on the floor and toss anything that’s broken. (I assume it goes without saying here that this might be a job best done when the kids are not around!) Grab a bag for toys that are in good shape but they have outgrown and put that aside to donate or sell. With what’s left, sort into like piles and put like items in bins. This is a great way to organize your toys and make it easier for the kids to clean them up, but it’s also a great way to help you make decisions about which toys to keep. Say you have a big pile of ponies, a bunch of legos, a bin full of trains and 2 plastic dinosaurs – get rid of the dinosaurs. If it’s not enough for an entire bin, you can bet that those 2 dinosaurs will either get lost or be constantly left out because the kids don’t know where they belong.

Avoid Recluttering: (Recluttering’s a word, right?) Don’t buy toys that don’t fit into those bin categories! And don’t let others buy toys outside of those categories either. If we have a birthday coming up and friends and family ask what the kids would like for presents, I tell them that due to the current bin situation, we are only accepting ponies, legos, and trains. Because that will make my life easier. Of course I don’t actually say it that way! But you get the idea.

Decluttering: Decluttering four kids’ worth of clothes isn’t just a once or twice a year thing at our house. I’m constantly trying to thin the clothes, because guess what? More clothes is just more laundry for mommy! In the kids’ rooms I have two bins and a bag. One bin is for clothes they grew out of that I can sell a consignment sale or hand down to nieces and nephews. The other bin is for clothes that are off season but will fit them again next year. Then there’s the donation bag – that’s for clothes that have some wear left in them but might not be in pristine enough condition to sell. It makes life so much easier keeping these bins right in the closet and saves time! If you are consistently decluttering the clothes, you won’t have that overwhelming job of going through the kiddos wardrobes twice a year.

*If you are sentimental about clothes, and just can’t imagine giving away sonny boy’s, “Baby’s First Thanksgiving” bib then allow yourself to keep one outfit from each season. It makes it easier to let the others go.*

Avoid Recluttering: Don’t buy so many clothes! This is a tip I have a hard time following. I swear, every year since my son has been about 2, I buy him a puffer vest because really, is there anything more adorable than a boy in a puffer vest? But I know he will not wear this adorable puffer vest because he hasn’t worn one since he starting picking out his own clothes when he was around 5. He’s 10 now. I also have triplet girls and let’s face it, girls are just more fun to shop for. Combine that with my addiction to consignment sales and I can really go overboard on clothes without spending a ton of money. But it just adds up to stuffed closets, overflowing drawers, and a lot of my time wasted sorting through it all. So this is more of a “do as I say, not as I do” situation. I’ll be going to a consignment sale this weekend I promise not to buy a puffer vest! Even though they are so cute and practical for chilly spring weather. 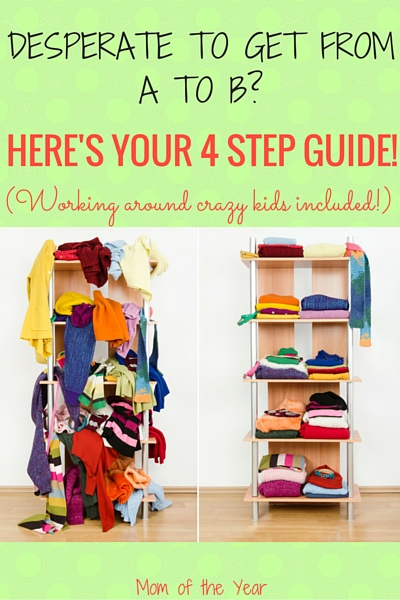 Decluttering: Preschool and early elementary school kiddos bring home a ridiculous amount of artwork. And if your kids are like mine, they make lots more artwork at home. You can’t keep everything unless you want to pay for a storage unit to keep it all!

But how do you decide what to keep?

Here are my rules:
1. If they bring home an art project that clearly looks as though they had no part in making it, I don’t keep it. I’m sure they had fun playing in the glitter and eating the paste while their teacher assembled that toilet paper tube sandcastle, but I know they didn’t make it, so I’m not keeping it. UNLESS it has their handprint or footprint on it. Then I keep it because awwww, remember how widdle their feet used to be?
2. If it’s just a coloring page, or a worksheet where they practiced writing the letter B, I toss it. If it’s a story that they wrote, or a picture they spent a lot of time on, or the first time they ever drew a person, I’ll save it. Because I might look back at that someday, but I doubt I’ll be interested in looking at a bunch of worksheets with practice letters on them.

Avoid Recluttering: Keep a recycling bin close to where you go through their bags from school. Toss the stuff you aren’t keeping immediately. I recommend keeping the kids’ stuff at the bottom of the bin so sentimental kiddos don’t find and pull out that almost blank sheet of paper with two lines scribbled on it.

Decluttering: Mail is a big source of clutter in our home. Here’s what I recommend: Cancel all the mail! Well, not all the mail, but dedicate some time this spring to going through the junk mail you get regularly and calling the companies to ask them to take you off their mailing lists.

Avoid recluttering: Remember that recycling bin where you toss the kids’ artwork? Drop the junk mail in that bin before you take the rest to your bill paying area. That will save you the job of sorting through the mail twice.

So, did anyone notice that three of the four most common sources of clutter come from the kids? But take heart moms, as the kids get older their stuff gets smaller. And someday they’ll move out and take all their stuff with them!