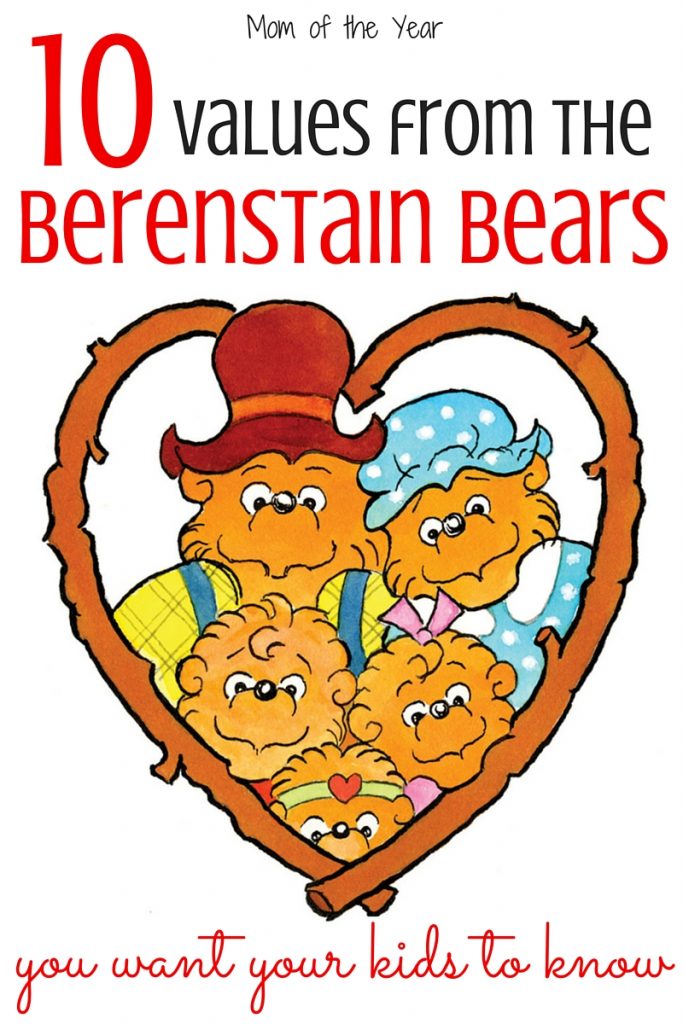 This summer was a flurry of affection. When we weren’t busy swooning over the boss Black Widow, the kids and I were cultivating another intense love affair, one with four bears. Yup, we fell hard for Brother Bear, Sister Bear, Mama Bear, and Papa Bear with a pretty reckless abandon. You see, our sweet Mother’s Helper had passed her collection of The Berenstain Bears books on to us last year. Come June, something clicked with my kids and The Berenstain Bears suddenly became the coolest bears on the block.

Having grown up adoring The Berenstain Bears myself, I was thrilled with their enthusiasm. These bear tales became the nightly request for a bedtime story. Ill-tempered afternoon grouchiness was quickly remedied with a Berenstain break. And we developed a fancy summertime tradition of having Mommy read us THREE Berenstain books every lunchtime (I shoveled bites in during the page turns–it was an ungainly assault on table manners).

The Berenstain Bears, in three short months, became our touch-stone of not only summer entertainment, but a solid reminder of some very important things that needed to be remembered. Things that are often out of vogue in today’s world, which means they need to be remembered more than ever.

These books champion the old-school values that I want my children to know, understand, and live out in their day-to-day:

1) Manners DO matter. I will remind my children not to interrupt and to say “please”, “thank you”, and “excuse me” until they don’t forget. As reinforced in The Berenstain Bears Forget Their Manners, a lack of manners not only make for an unpleasant household, it grates on the nerves of those around you. Taking the time to be polite is a way of saying “I respect you/your effort/the fact that you are in the room with me.” It encourages unselfish behaviors and awareness of others’ feelings.

2) Treat others the way you want to be treated. If I can instill this in my children before leaving this earth, I’ll consider it a job well done. As taught in The Berenstain Bears and the Golden Rule, “Do to others what you would have them do to you.” If you wouldn’t like being treated in a particular way, neither will someone else.

3) Take care of what you’re given on this earth. These books are aces at teaching this value. From seeing how the cubs get themselves into mess when they don’t clean their room in The Berenstain Bears and the Messy Room to learning our responsibility to care for the environment in The Berenstain Bears Don’t Pollute (Anymore), the trouble with not being good stewards of what we’re given is apparent. If something is under your care, take care of it.

4) Respect others. Such an uncommon message in today’s culture, but kids and adults are not jointly running the show. In The Berenstain Bears Show Some Respect, we’re reminded that children must respect their parents. The world doesn’t revolve around their wants and desires.

5) Take your education seriously. The academic and social lessons learned at school are important for successfully participating in this world, so it’s not a good idea to blow them off. Paying attention and doing your work earnestly is a wise choice, as Brother Bear learned the hard way in The Berenstain Bears’ Trouble at School. This concept also matches the value of caring for what we have; if you’ve been blessed with the opportunity for an education, use it!

6) Too many things isn’t a good thing. In our modern world of more, more, more, teaching kids to appreciate what they already have is a tough battle for us parents. The Berenstain Bears Get the Gimmies and The Berenstain Bears’ Mad, Mad, Mad Toy Craze shed light on the struggle with materialism while speaking kids’ language. These books are so relevant–two of my favorites! 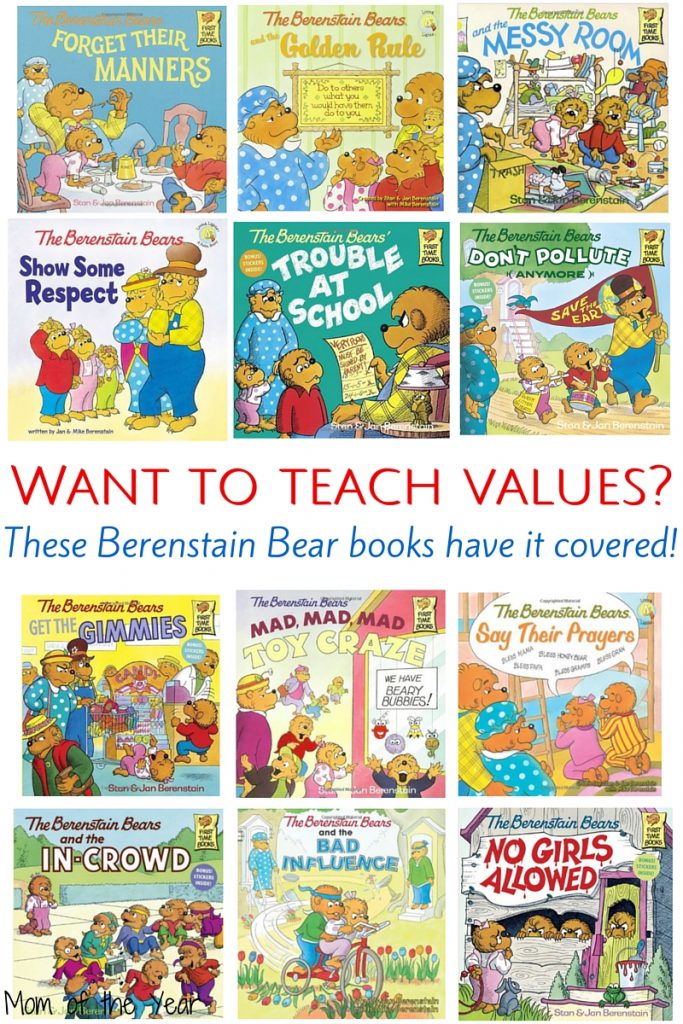 7) Say your prayers. I believe it’s a gift to teach our children that they can pause during their days to give thanks and seek guidance. We can’t always be there with them, but we can make sure they know God is always there to listen, as the cubs learn in The Berenstain Bears Say Their Prayers.

9) Boys and girls CAN play together. While it’s natural for boys to want to hang with other boys and girls with other girls, mean exclusiveness based on gender isn’t tolerated in our home. Shutting people out in an unkind way makes them feel bad. The cubs explore this issue in The Berenstain Bears No Girls Allowed. And get a double bang for your buck with this book, which also tackles why bragging is another poor behavior choice.

10). You will always have to do work. No listen, I’m not bouncing out of bed on Saturday mornings at the prospect of cleaning toilets, but it’s part of this life. You find your sweet slices of time to relax and chill, but the day to day is about tasks, and getting them done, however unseemly. Welcome to the world. The Bear family quickly learns what happens when you ignore responsibilities in The Berenstain Bears and the Trouble With Chores. It’s not a pretty scene, trust me.

You see, I can’t guarantee who my children will grow up to be. But I’m going to do my darnedest to fill them up with the good stuff while I can. The old school values I learned while reading about a very cool set of bears years ago are perfect for my own kids’ story times today.

As for me and my house, we’re sticking with The Berenstain Bears.

(and for the record, Mama Bear is always right…)