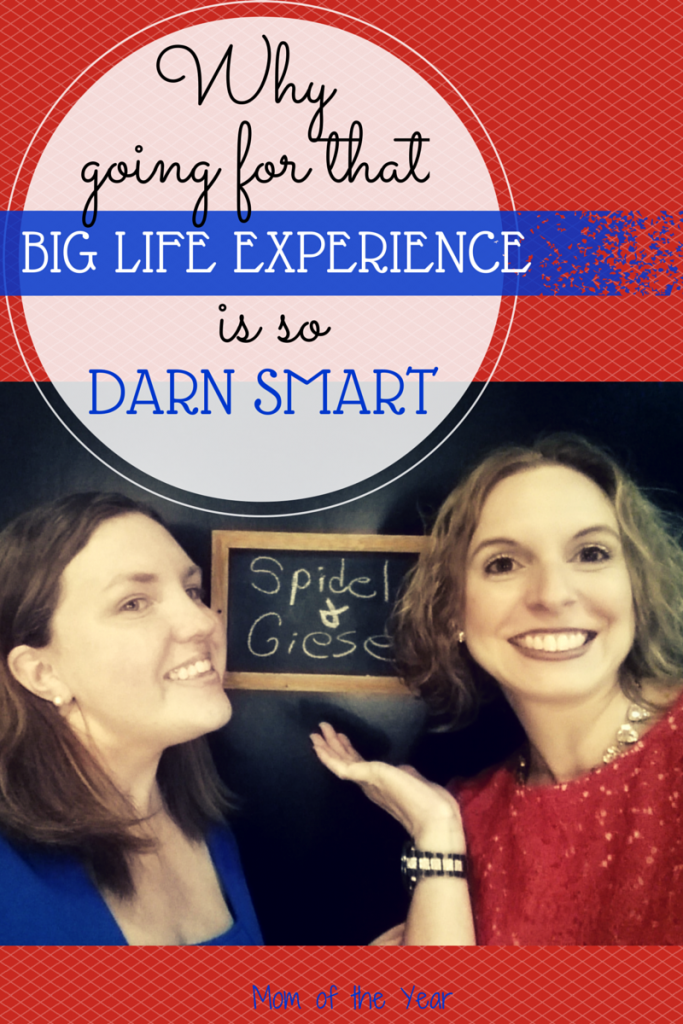 It was typical Tuesday night. I was desperately trying to crank out some overdue blog work while hollering at my husband to just give up on the chicken nuggets and “get the kids in the bath already!”. Then my phone rang, and it was Stephanie Giese of Binkies and Briefcases, “Hey, do you want to go down to Texas and be on Glenn Beck with me?”

For those of you who don’t know Stephanie, here’s the short story: SHE IS ROCKING THE WORLD. Her recent post about the astounding inappropriateness of girls’ clothing on the mass market went beyond viral. While she’s busy managing the response to this, she’s also running full speed ahead with the Blog U 2015 conference (the second annual installment of the insanely successful conference she founded last summer), and oh, raising three young children.

So basically, when the scary-fantastic Stephanie asks, you say yes.

Glenn Beck wanted us to come on his show and discuss appropriate Halloween costumes from a mom’s POV. I could do this??

Forget the chicken nuggets; I called out to my husband, “Hey babe, how do you feel about me popping down to Texas?”

We live in Pennsylvania.

Fast forward three weeks and a lot of finagling, and I found myself on a plane. And then in a green room. Like, a legit green room–you’ll excuse me while I pee myself a bit here.

And while I was hanging out in the very green room, forcing myself not to on-air nervous puke, post-show pal-ing it up with Glenn Beck and his very sweet daughter (who thanked me for doing the show because it “meant a lot to her dad”) and then madly snatching souvenirs for my kiddos in the airport while we dashed to our plane, I had some important realizations.

I have people. Not as in a “my people will call your people” situation, but as in, I’m not alone in this world. When Steph first asked, I thought, “yeah, right–I could never actually pull this off”. And then my husband offered to take a day off work, my mother-in-law drove out to help with the kids for a night, and my friend jumped at my plea to pick my kids up from school. When I asked my dad for airport transport, he simply told me give him the times–of course he would do it. Another friend was willing to cover a few-hour gap in childcare if need be and yet another friend quickly started helping me research Glenn Beck and reviewing talking points.  Hundreds of people on Facebook took the time to weigh in and help me sort out attire dilemnas–the most import element of the entire trip, obviously. The support and encouragement of others as I prepped for and then went on this wild-to-me adventure blew me away. And that people actually took the time to tune into the show and then encourage me afterwards? My eyes welled with tears as I checked my phone that night.

I know this life can all too often feel lonely, but sometimes it’s when you most need people that you realize you aren’t alone. Through this trip, I felt caught. I felt blessed. I felt grateful. 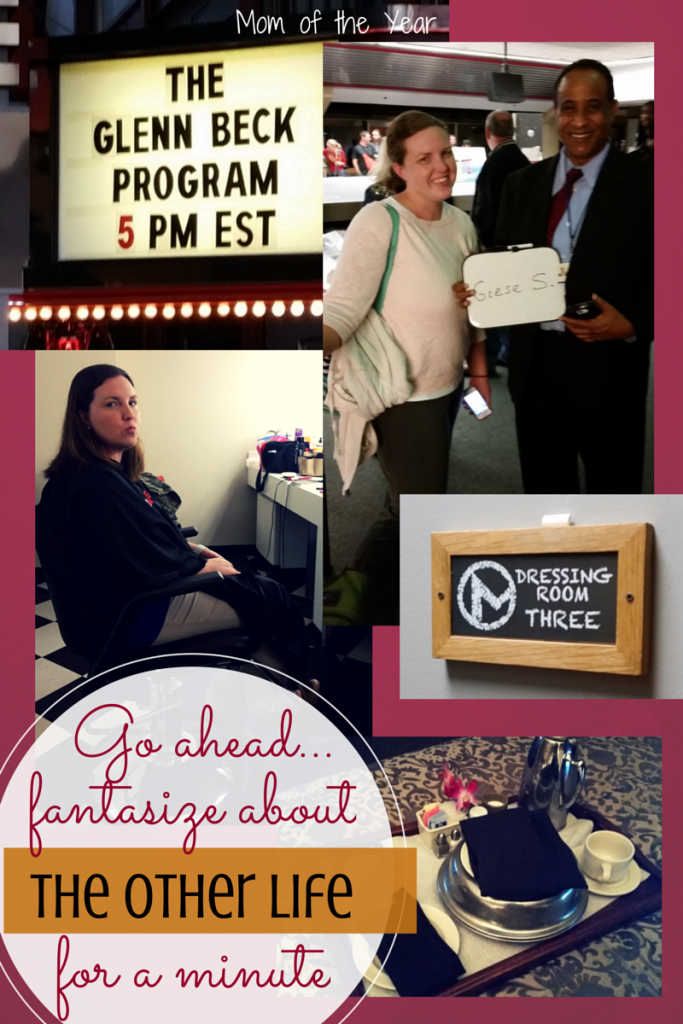 Jumping is ALWAYS boss. I was the kid in college who had to take Ativan before any presentation so I didn’t faint away in panic of public speaking. Needless to say, this appearance on Glenn Beck was NOT “right up my alley”. It was very far removed from my alley, several lanes over, in fact. That and despite the nerves that left me literally shaking a few days prior and post-show, I will never, ever regret that I did it. Truth told? The green room, private hotel room and car service were pretty sweet perks that just make me feel boss. I’m okay with that. 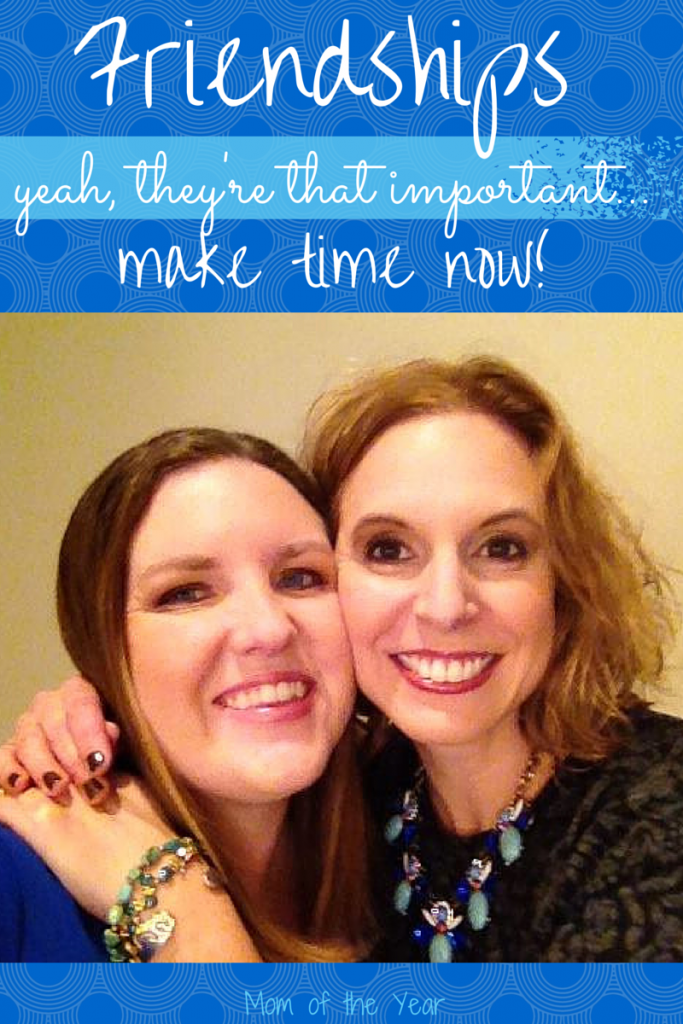 Real friendships are good. Steph and I have done a lot of huge life experiences together–cranked out a blog conference, thrown book signings, hosted a ladies’ night out, family-timed it up on the Fourth of July, and endlessly supported each other online. She wows me, of which I’ve made no secret.

The thing that you may not know is that she’s terrified of flying.  And I’m not uber-touchy-feely. I love greeting with hugs and kisses, but beyond this, not so much…Steph and I held hands on every take-off (and with lay-overs, there were several). As soon as the cameras cut on the show, she walked across the stage and I squeezed her hand for dear life. I needed support–emotionally and so I didn’t fall over in my heels. We prayed together before we went on set, and I endlessly told her how proud I was of her for accomplishing all that she has. We shared a messy steak sub in the airport and ignored the crumbs on each other’s faces. When I froze on camera, I will never, ever forget her mouthing “Isaac’s costume” from across the set to cue my talking points and help encourage me.

And none of it felt weird.  At 35, I’m not sure I was supposed to meet a genuine real-for-life friend that I can totally be myself around. But I did. And I don’t have the words to express the realness of this blessing.

I am also realizing the value of full-on supporting someone else in this world. I am so proud of what Steph is doing, and the opportunity to be there for her and help her promote her message? A gift in its truest form.

Regardless of what happens or doesn’t happen going forth with this whole blogging business, I will forever be grateful for the time I hung out in the green room with Steph–and for all the too-important lessons I learned while we were there.

To Texas, Glenn Beck, and crazy life experiences you were never supposed to have.

You can catch a longer clip of the 10/28/14 show and read about it here, but please pay the $1 and subscribe to 30 days of The Blaze TV so you can watch the whole show–I say way more semi-intelligent things in the second half so I don’t look quite as vapid. xo 😉