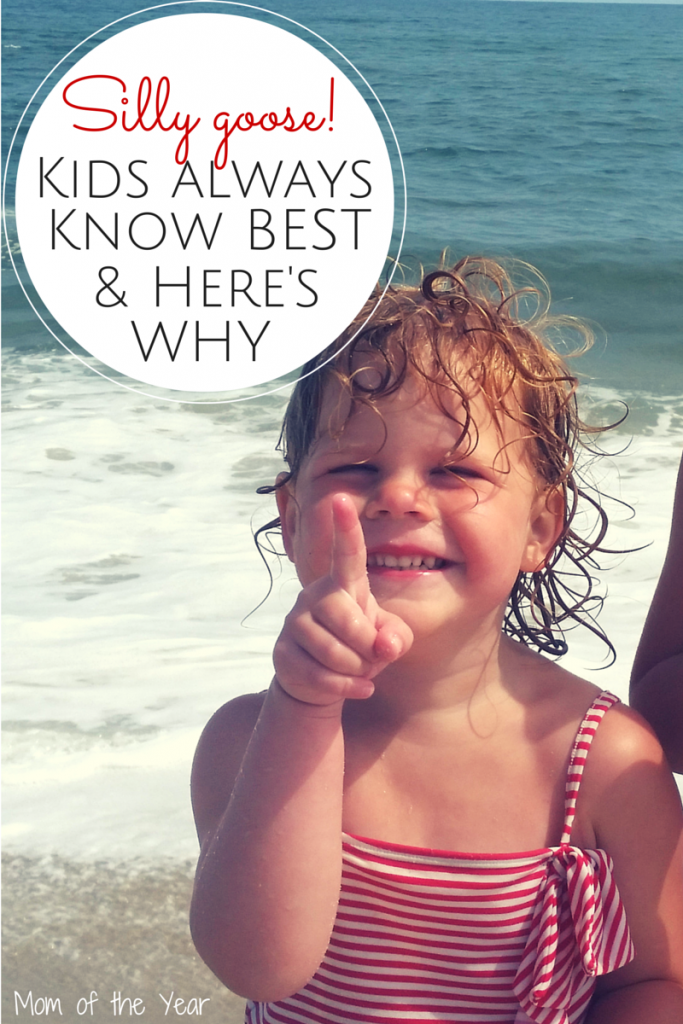 Today, my little gal turns the big 4. Mind-blowing when you consider the many days I doubted we would ever make it to 4 o’clock, much less 4 years.

Elyse amazes me. She amazes me in the way that sometimes I look at her and wonder, “Is this creature real?” This astoundment might happen after she does something fantastically sweet, like inviting a child playing alone at the park to join her on the swings. It might be when she does something horridly bratty, like throwing a tantrum so epic I’m certain the surrounding neighborhood will have our house officially declared as a war zone.

A solid 90-some percent of what she does makes no sense to me. Why she refused to eat baby food after 6 months. That she had no time for crawling or walking–just started straight in with jumping and tearing through the house and has never stopped since. There is her staunch requirement that all her dresses must have at least one shade of pink in them and that her Rainbow Dash My Little Pony must be placed on the left side of her nightstand. She takes out her pigtails when anywhere near the vicinity of water and prefers to wear rain boots. Everywhere. I have no idea where she got the notion that it was her necessary responsibility to bathe brother’s stuffed Angry Birds nightly, and moreover, I have no idea why he lets her do it.

But that’s the thing about Elyse. She’s such an insane force, you find yourself accepting her for who she is–and falling in love with her along the way. As her mother, I am wiped before I am first plastered with her endless kisses in the morning, but my prayers aren’t for my own strength, they are for her future spouse–not that she makes the right match, but that he might have the stamina to reckon with her Elyse-ness for the rest of his life.

And then I pray that she never, ever changes.

You see, Elyse is boss. She is my girl, my love, and while with clear eyes I see all the changes and growth that need to happen in her life, I never want her to change. Her spirit, her heart, her energy…thank you, God. Thank you for making her her. 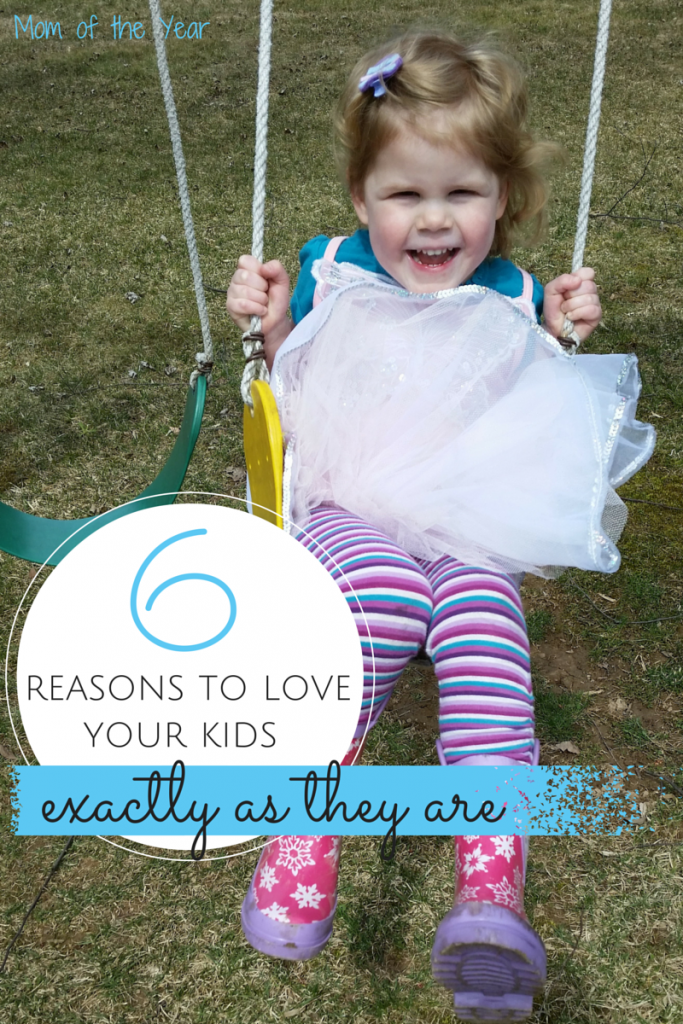 What I never want to change about her:

1) Her temper can be abominable, but may she never learn to stop standing up for herself. Obviously, the kicks and hits won’t fly and many time outs will be suffered as we discipline her inappropriate choices into acceptable expressions of her feelings. Yet, I am so grateful to have a daughter who recognizes what she doesn’t like and isn’t afraid to fight against it. This life is brutal; taking it lying down is never a win.

2) She gets that being a girl is fun and loves it. I get so confused about what side of feminism enjoying painting my nails puts me on. But I love it. And so does my gal. Princesses, bows, tutus, and sparkles are all pretty, and the more of them we can incorporate into our day-to-day sounds like a win to me. It’s okay to delight in pretty things, it really is. When she spent an entire winter refusing to take off a tutu? Rock your fabulousness, babe.

3) She has no concept of limits. How cool. Fear isn’t part of Elyse’s world, and I’ll be honest, I’m jealous. I wish I could so wholly throw myself into life. And there is no such thing as taking time to save up energy so she doesn’t get tired later. She runs from the minute she gets up until she finally crashes at night. Listen, by the time she’s a mom herself with young ones who exhaust her, I highly doubt she’ll still be interested in running mad circles in her room for an hour post-bedtime. (If she is, more power to her; her Fitbit step count will love her.) In the meantime, if she wants to spend her days racing up and down the stairs, squealing in delight chasing butterflies, fearlessly launching herself into pools and off swings, and NEVER EVER SITTING STILL, good for her.

Elyse places no limits on what she can or can’t do–she just does it all. Go for it in this life, sister! Mommy will just steal naps on the couch as often as she can.

4) Almost all her friends at her princess birthday party were boys, and it was perfect. Elyse has always run with the boys and couldn’t care less. I love how she skips the whole gender quotient when finding her friends. She just hangs with whoever is there and rolls with it. Moreover, I love that she isn’t afraid to assert herself regardless of the crowd. If she’s the only one in a tiara? Who cares. She’s serving the pretty pink cupcakes anyway–and they like them. 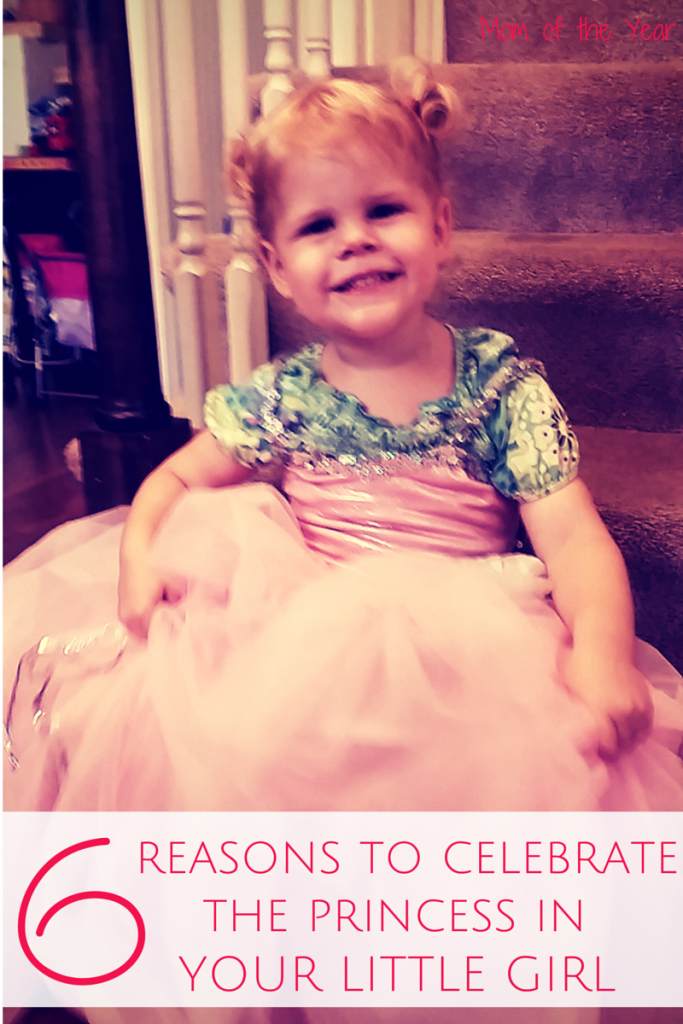 5) She doesn’t know how to curtsy. I have no idea where she learned her dramatic dance moves. Her twirls and emphatic leg lifts are impressive, albeit totally sans any real talent. But it makes her happy, so it’s all good. However, after performing a rather involved routine with a friend during a playdate, Elyse was dismayed to learn she didn’t know how to curtsy like her partner. I say, screw it. She ends her dances with entusiastic giggles and claps for herself. In my book, this is better than any curtsy any day of the week. Keep dancing (and finale-ing) to your own beat, love. It’s gorgeous.

6) Her enthusiastic expression of love is overwhelming. Sure, I duck away from her vigorous flying hugs at times (too many unguarded wallops to my boobs), but what a blessing. Love can be in short form in this world. Someone who freely expresses it with abandon? A gift. Bring on the hugs and kisses–always. 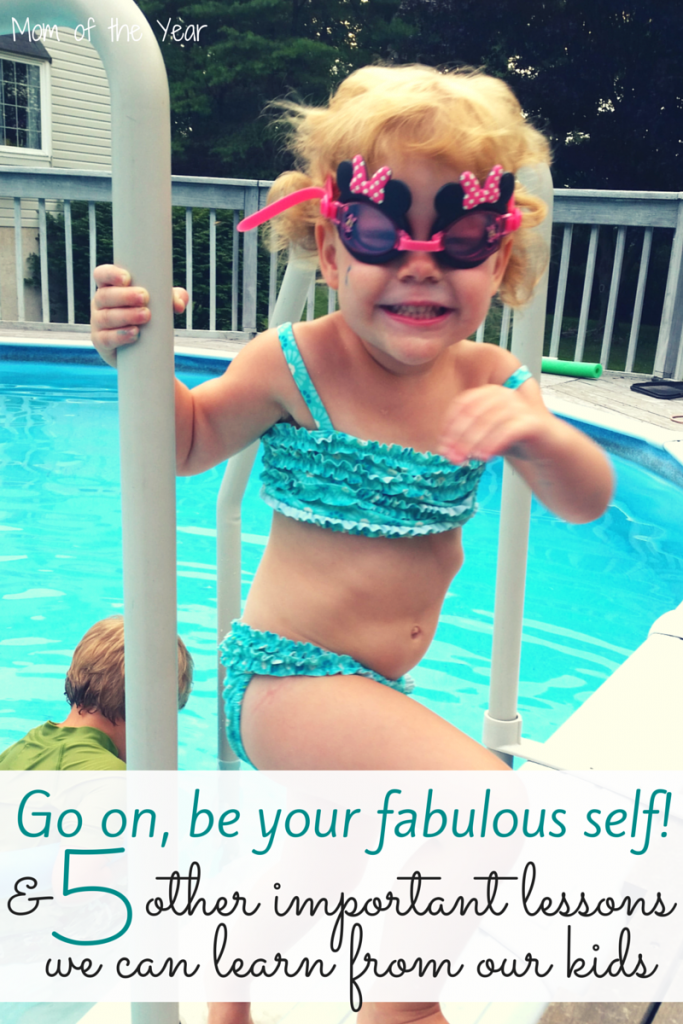 I’m proud of my girl, I’m proud of who she is. Sure, her father and I have our work cut out to guide and temper her spirit–but we’re guiding and tempering it, not changing it. Never changing it, because she already rocks, just as she is. And I’m already in awe of who she will become.

Happy birthday to my hero. 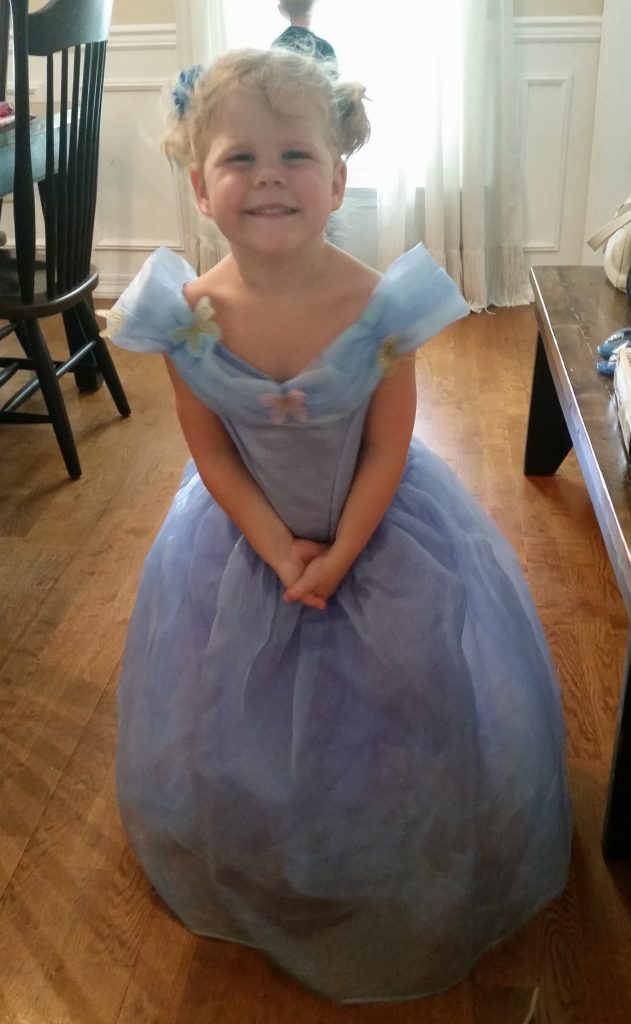 Thanks for making her day extra special with this fancy Cinderella party dress, Costume Express! Love that she was too nervous to put on the matching gloves because they were SO gorgeous 😉