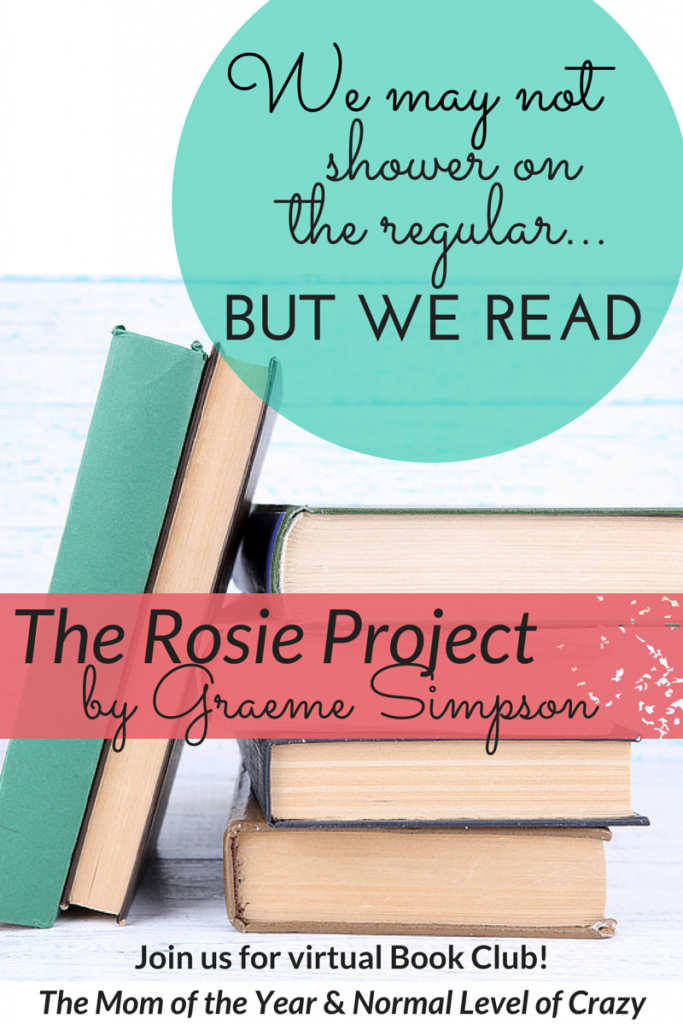 Thrilled to turn over today’s book club post to my sweet reading partner, Carrie of Normal Level of Crazy.This month’s pick was one of my favorites, so can’t wait to share it with you, and head’s up–next month’s pick is up for grabs at the end of the post! Read on, friends!

Happy February, Everyone!!!  While this winter certainly hasn’t been as bad as last, I’m still fighting the winter doldrums just the same.  You?  Luckily, I have this amazing book club with my great friend Meredith from Mom of the Year to keep me from becoming 2007’s Britney Spears.  And, with dreams of spring, so many great books to come that my nightstand has a Leaning Tower of Pisa assortment of books on it awaiting my consumption.  We can’t wait to share them with you all!

Now onto The Rosie Project by Graeme Simsion – our pick for January! 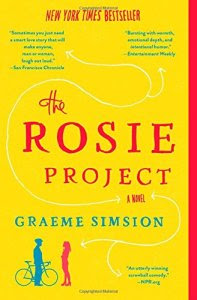 What did you think??

Meredith and I both enjoyed it immensely.  I always appreciate when an author goes out on a limb and chooses an unconventional main character.  Of course the implication here is that Don, the main character of The Rosie Project, has Asperger’s Syndrome, a condition that includes delays in certain developmental skills, most notably, socializing with others.  What I liked most was that the author treated Don’s characterization delicately.  We were never laughing AT Don for his idiosyncrasies.  We were appreciating his stance on certain things (I certainly appreciated his organization skills, of which I have none!) and his often times unique coping mechanisms.  As might be expected, there were humorous parts (some of my favorite parts of the book!), but they were sweet, not mocking.

What parts of the book did you find most funny?

One of my favorites?  When Don admits he’s not necessarily good at reading people and Rosie responds with an, “tell me something I don’t know.”  He takes her literally and tells her that bees and spiders explode during sex.  Classic.

Do you agree with how the author treated Don’s character?  Do you know someone with Aspergers?  Do you feel this was an accurate representation?

Rosie, also, was a fun character to read and I absolutely adored her.  I particularly enjoyed her when the two went to New York City to work on the Father Project.  Her affection for Don was clear and the juxtaposition between the two both charming and fun.  And of course I love a girl who curses 🙂

Did you like Rosie?  Did you think it plausible that her and Don would end up together?

So excited for the movie version as well!!  Who would you cast as Don Tillman?  Rosie Jarman?

I am also planning to read the next installment in this series, The Rosie Effect.

Will you read it?  Or do you feel like The Rosie Project should be a stand alone book?

So what’s next on the docket?  Only a book that we are DYING to discuss with you!! 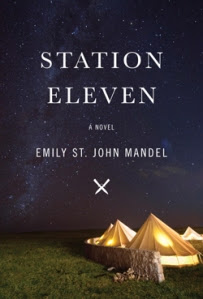 Get ready to chat about Station Eleven by Emily St. John Mandel the first Friday in March!  Meredith and I are chomping at the bit to hear your thoughts!  I have a BURNING question about the book that you will have to tune in for in March to hear.  I bet some of you have the same one!!

Here is the summary as presented by Amazon:

An audacious, darkly glittering novel set in the eerie days of civilization’s collapse, Station Eleven tells the spellbinding story of a Hollywood star, his would-be savior, and a nomadic group of actors roaming the scattered outposts of the Great Lakes region, risking everything for art and humanity.

One snowy night Arthur Leander, a famous actor, has a heart attack onstage during a production of King Lear. Jeevan Chaudhary, a paparazzo-turned-EMT, is in the audience and leaps to his aid. A child actress named Kirsten Raymonde watches in horror as Jeevan performs CPR, pumping Arthur’s chest as the curtain drops, but Arthur is dead. That same night, as Jeevan walks home from the theater, a terrible flu begins to spread. Hospitals are flooded and Jeevan and his brother barricade themselves inside an apartment, watching out the window as cars clog the highways, gunshots ring out, and life disintegrates around them.

Fifteen years later, Kirsten is an actress with the Traveling Symphony. Together, this small troupe moves between the settlements of an altered world, performing Shakespeare and music for scattered communities of survivors. Written on their caravan, and tattooed on Kirsten’s arm is a line from Star Trek: “Because survival is insufficient.” But when they arrive in St. Deborah by the Water, they encounter a violent prophet who digs graves for anyone who dares to leave.

Spanning decades, moving back and forth in time, and vividly depicting life before and after the pandemic, this suspenseful, elegiac novel is rife with beauty. As Arthur falls in and out of love, as Jeevan watches the newscasters say their final good-byes, and as Kirsten finds herself caught in the crosshairs of the prophet, we see the strange twists of fate that connect them all. A novel of art, memory, and ambition, Station Eleven tells a story about the relationships that sustain us, the ephemeral nature of fame, and the beauty of the world as we know it.

Annnnnnnnnd … a free copy of Station Eleven to anyone who comments on this blog post by 2/13/15 5am EST!!!  Must be 18 or older and live in the continental U.S. to be eligible to win. 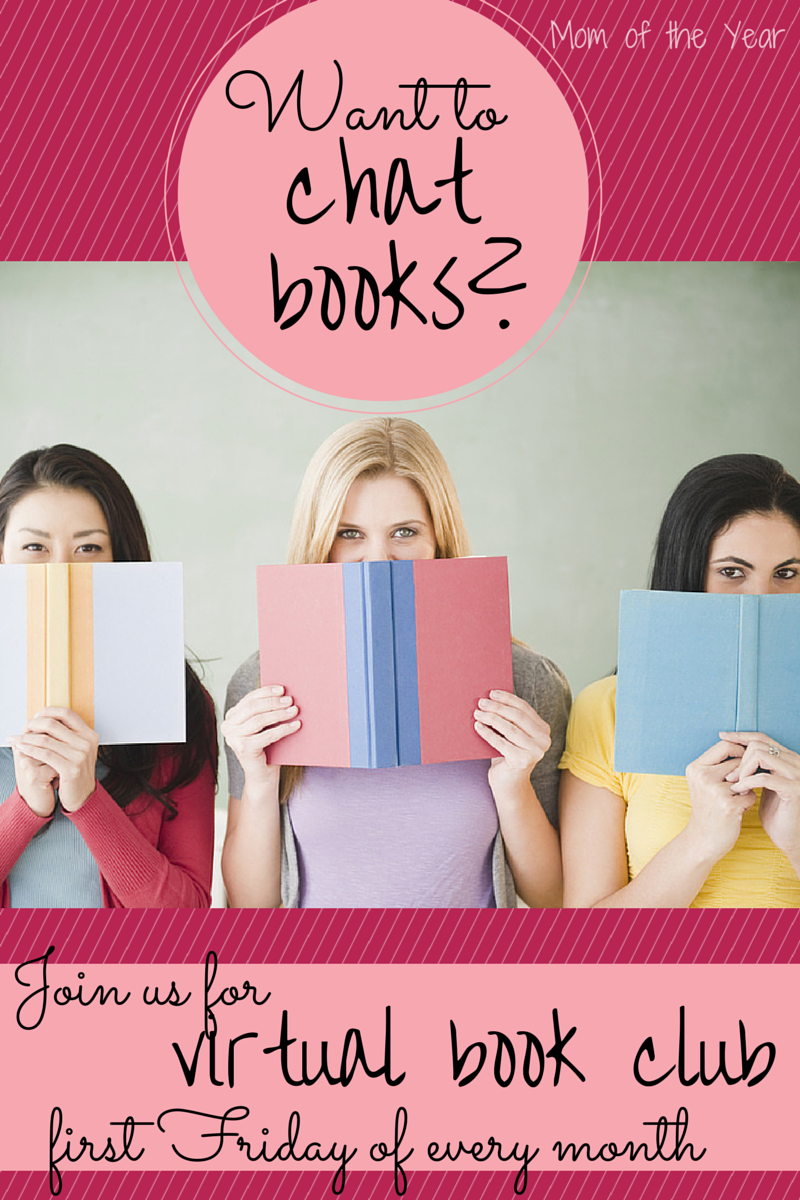 *If you would like to learn more about Asperger’s Syndrome, visit Autism Speaks, where you can learn much more about this condition and also donate to help provide education, awareness, and research!*

******Thank you to Random House for providing the copy of Station Eleven!*****

UPDATE 2/13/15: Congrats to JD of Honest Mom for winning the copy of Station Eleven!