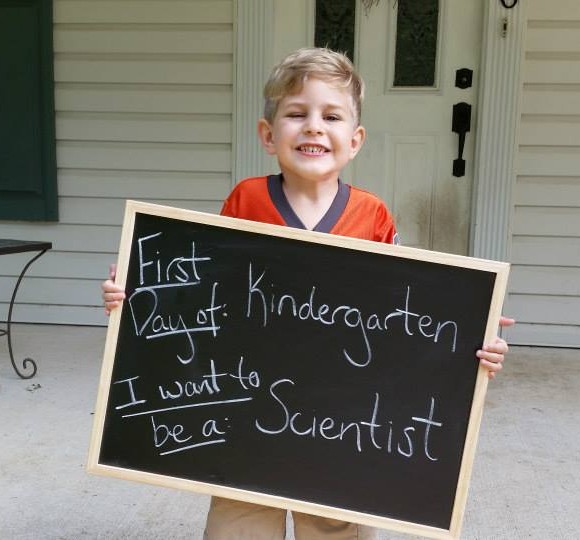 Can’t I just buy him a white lab coat and skip the whole school bit?

I was going to be The Cool Mom.  You know, the one who rejoices when her kids head off to school so she has a slice of time to herself?  It was going to be sweet; I had it all planned out for about six years (my son is only 5, by the way).  School bus for kid would = happy dance for Mommy. Surely.

But I’m not so super at self-estimation.  Somehow I forgot that every time I find myself on the brink of something huge and new, I tend to become a spastic mess.  I lose my crap, if you will; it can be a bit unseemly. It’s in these times of change that I really wish I didn’t have to be friends with myself.  She’s just so darn high-maintenance.

I remember bringing my son home from the hospital, carrying him up to the nursery, settling in my carefully selected trendy glider rocker, and promptly bursting into ferocious tears.  Sure, a few things like exhaustion and raging postpartum emotions were at play.  A perfect storm waiting to happen, but the heart of the matter was–I was scared.  Really, really scared.  I didn’t know how to do this.  I didn’t know how to manage spit-up, exist without sleep or leave the house with a newborn.  I thought down the road to navigating playdates and began dry-heaving in fear.

When things are unfamiliar, I get panicky.  A fight-or-flight reaction of sorts–one that leaves me wanting to flee to the safety under my bed covers rather than trying to push through something new.

But we have to do it.

So I went to all three of my son’s Kindergarten orientations.  And…they did nothing but soothe my fears and make me fall in love with the school and his teachers.  More shockingly, despite my desire to avoid the terrifying newness of fellow parents, I found myself making friends, chatting people up and kind-of/almost looking forward to upcoming school events.  So weird.

As for my son?  He’s beyond excited and has been counting down the days for weeks. He couldn’t be more thrilled about starting school.

So it would appear that Kindergarten is not a terrible place and that my son wants to go there.

In turn, this may indicate that perhaps my fears are unfounded.  That possibly, similar to those overwhelming early days of babyhood, we will somehow figure it out.

And it may end up being really cool.

What does this mean for all my present panic?  Not one darn thing; let’s be real–I’m a Mommy.  With a Kindergartner  My terror isn’t going any anywhere.

While I’m madly cheering him on and occasionally even recognizing that we may survive, I’m most certainly still going to be That Mom–the one sobbing at the bus stop this morning.

And I think that’s okay too.

The one in which my son tells me it’s not okay for me to hang onto the back of the bus as it pulls away…: