This blogging world is full, chock full, of bloggers who touch your world in so many ways.  Often these savvy writers may pop in and out of your life, but once in while,, you chance upon someone who says hello…and then stays around for a more than a while.

I count it as one of my blessings that I met Eli of Coach Daddy over a year ago and am still getting to hang out with him in the blogosphere today.  He’s so much fun, and he always makes me laugh–time and time again.

When I found out that Eli was chosen as a BlogHer 2014 Voices of the Year, I was fist-pumping in my living room.  Go Eli! YES! His fantastic was acknowledged, and I was thrilled it could be promoted through the blogging community at large.  Just as I’m thrilled it can be shared with you here. 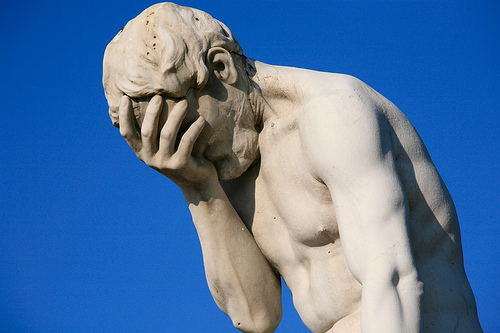 Our house. It’s not Sass Central, but … it’s an official retailer of Sass and Smarta**, Ltd.

In our house, “way to go” means you jacked something up. “Genius” is anything but. “Great”? It’s “oh, crap!” in the worst connotations.

The police have never visited. We’re nearly hospital free. That speaks volumes for a home with three girls, 9, 13, and 16. Outside of 17 near-mishaps on the stairs, one unconfirmed broken nose and a suspected hyper-extended elbow, we’re good.

Who leads this bunch of odds-beaters? Me. The Dad of the Year, you might call me.

Which is both true and laughable. If “way to go” follows when you knock your sister’s spaghetti bowl onto the carpet and “genius” rings out after you request a poster board at 11 p.m. tonight for your project tomorrow, what else did you expect?

I’m the cool hand. Once, Grace spilled an entire super-sized soda into the backseat floorboard of the family car. I didn’t even yell. Never mind that a 9-year-old had a super-sized soda. And I yell only once every 17 weeks or so. On average. Not including when I lose my keys or wallet. Or sandwich.

I coached all three girls in soccer. And they turned out good anyway. We go on daddy/daughter dates. Listen to music together. We play games. Color. Draw. I’ve been Lunch Dad, Field Trip Chaperone.  Chef, playset, and punching bag. Sometimes, all at once.

It’s all here – nearly 300 posts, mostly declaring a daddy’s love for his girls. You make me tall and strong, even though I’m not. Coach Daddy is for you, so that long after I’m in heaven with PopPop, Otis Redding and Grace Kelly, you’ll have the stories. And my Pandora password, if I can remember to write it down.

Hey wait … that comb thing. That’s evidence of the good kind of Dad of the Year, right? I bought Chips Ahoy with the wire cutters to make you happy, and I knew I’d never blog about it after you objected to the photo …

Oh crap. I think I just blogged about it.

Here’s your trophy back.

When he’s not trying to placate a middle child or answering the tough questions for all three daughters, Eli Pacheco writes the blog Coach Daddy. Follow him on Google Plus, Pinterest and Twitter.