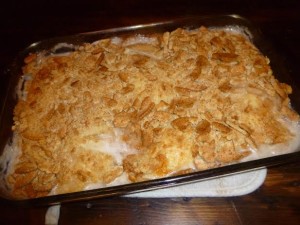 Let’s be honest. Asking me to cook? Generally a poor idea. Very poor. But when BlogHer and Campbell’s asked me to whip up a little something with one of their cooking soups, it was obviously Meant To Be, because as it turns out, the one recipe I make well and enjoy making features Campbell’s Cream of Mushroom soup.

This recipe is extraordinary. Extraordinary because it’s from my grandmother, but I never wrote it down. I just started making it after watching her make it for years. And while she has passed, so I can’t check in with her now, I’m think it’s pretty darn close to what she made.

Extraordinary because it tastes awesome.

Extraordinary because my kids LOVE IT.

Of course, I take all of this to mean that the recipe is indeed God-ordained, and continue to make it with an excited vengeance at least every month. My husband has yet to complain. 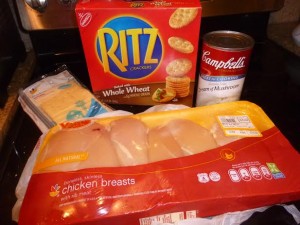 I have no idea how to make raw chicken look appealing. This is one of many reasons I am not a food blogger.

Check out the recipe below. And make it. In honor of my grandma, and in honor of of the rare evening I don’t feel like a total failure in the kitchen.

But listen, if Grandma’s Swiss Chicken Casserole gets old (blasphemy!) or doesn’t work for your family for whatever reason, Campell’s has stocked up on kid-friendly recipes through their The Wisest Kid in the Whole World™ campaign and is bringing them to your dinner table.

So snatch up one of the classic red and white cans and pop over to Campbell’s to find a great new recipe for your family. There are suggestions like kid-friendly Mini Chicken Pot Pies and cool ways for your kids to eat Tomato soup.

For another way to put Campbell’s to awesome use, my all-kitchen-related-matters consultant, Alisa, recommended this recipe for Cheesy Chicken Enchiladas.  And you know what? I’m actually going to give it a whirl. Because if Alisa says it’s good, it must be phenomenal.

Anyway, expand your cooking repertoire and give some new ideas a go! And without further adieu, here is… 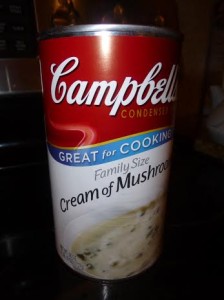 Snatch up the red and white can!

Spoon 1/2 can of soup on the bottom of 9×13 pan.
Line chicken breasts in the pan.
Spoon remaining soup over the top.
Layer with the Swiss cheese slices (break them apart as necessary to cover the chicken).
Break up Ritz crackers and sprinkle over the t0p.
Bake for 45 minutes or until dish is bubbly and cheese slightly browns.

***This post is sponsored by BlogHer and Campbell’s, but all opinions remain 100% original*** 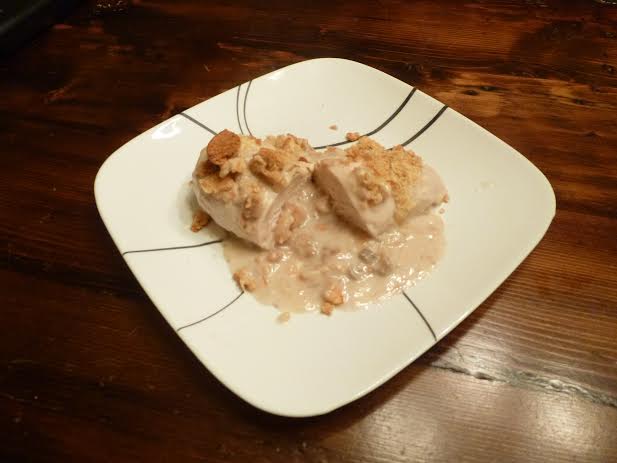