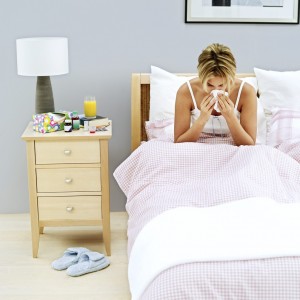 Source
I would give anything to look this cute while sick. And to have such awesome highlights, but that’s beside the point, I suppose.

Last week I thought I was going to die.  I woke up in the middle of the night to a raging fever, pounding migraine, and the overwhelming sense that I needed to empty the contents of my stomach IMMEDIATELY.  Upon standing up to address the situation, I fell over.  I then crawled to the bathroom.  And then crawled the entire way downstairs to grab the ibuprofen I had stashed in my purse.  To add to the pitifulness of the scene, I even stopped and rested on the cool floor a few times, whimpering in pain.

Definitely one of those moments in life I was shining.

When my husband woke in the morning, my fever had yet to abate and the trips to the toilet continued.  It was clear that he would have to take the day off, or my 2 yr. old would have to fend for herself while my 4 yr. old walked the 5 miles to preschool alone (I am sure this would have boded well with Child Protective Services).

And God bless my husband.  He made not a peep about having to totally overhaul his work commitments at the last minute and did his best to keep the kiddos out of puking range.

At one point, after he had them securely settled with an engaging princess movie, he came upstairs to check in on me, “Can I get you anything?”.

“You are not going to die.”

He exhaled to summon patience, “You do not need to go to the ER. You are just sick.”

“But this is the worst pain I have ever been in. And the last time I felt this bad, my appendix had burst.  You told me then that I didn’t need to go to the ER and you were wrong.”

“Yes.” I couldn’t see him under the pillow I had over my head, but I could sense his jaw clenching in possible/definite frustration. Not that I have ever thrown this appendix situation back in his face before.

“My appendix may have burst again”, I suggested.

“This cannot happen; they took out your appendix.”

“Okay, so I’m going to go back down to make sure the kids aren’t killing each other.”

Still firmly gripping a plastic trashcan beside the bed with one hand, I reached desperately for his hand, “Just sit with me for a moment…”

He humored me.  Such a good husband, that guy.

“Listen”, I breathed, pausing for dramatic effect, “If I don’t make it through, please make sure the kids know that I loved them.”

“And remember to wrap the gift for Isaac’s friend’s birthday party next weekend.”

“Yes, because if you die, we will still go to the birthday party.”

“And make sure Elyse marries well.”

“You sure I can’t get you anything?”, he asked while leaving the room, not looking back.

“Just my phone so I can call 911 for an ambulance”, I hollered after him.

Shockingly, a couple days later, I felt fine and had not died.  But I see this as less the point.  There was definitely a risk.  And my husband can be just so darn dramatic in his insistence that everything is fine.

Gosh; someone has to be the practical one in the relationship, right?