Source
All the glowy, entrancing perfection

I am not a huge one for sap or intense woe over departing seasons, but there is one thing I am very sad to say goodbye to–those lazy nights around the fireside.

You see, my family doesn’t do that much cool stuff.  We are a pretty basic, simple people, who love us some good Duck Dynasty episodes for $7.98/season on Amazon and think we are boss if we manage to make it up until 9pm.  But every now and again, when the weather is warm, my husband will build a fire in our pit and we will chill the evening away.  I’m talking at least 10pm, people.  This is serious stuff.

Don’t mistake me, these fireside nights aren’t an epitome of perfect bliss.  They often result in boatloads of screaming at the kids not to get too close to the flames, irritable tension between my husband and I over who’s turn it is to “do”bedtime” and way too many burnt marshmallows…BUT, it is kind of cool.

The kids love it, I usually get to drink one of my husband’s groovy home brews and just relaxing around the fire is…well, really relaxing.  Since I always crave more relaxation in my life, these nights have become aces in my book.   While I think these nights are wonderful, I have never cried before over their departure.  There was always next year, right?  But then, this year, I got gut-punched with sadness.

You see, my son has gotten into chasing fireflies.  He runs with sheer glee and abandon from one teeny flashing light to the next.  I could care less about the fireflies, but the joy on his face has me sold.  He screams, “Oh! I got another one!” after each temporary capture and his self-pride is infectious, delightful, smart–when is the last time I have squeed with bliss over something so perfectly simple?

The truth is, watching his childlike passion taught me a lesson in embracing life and (quite literally), whatever it floated in front of me.  Call it the innocence of childhood or whatever you will.  He was happy, he was having fun, and I can only pray that I can find some small measure in my life to love life so hard.

So you’ll excuse me.  While I rejoice in the cozy long sleeves and apple-crisp scents of fall, I am mourning the loss of these summer nights a bit.  Those precious evenings when chasing after fireflies and “catching another one” is the the only thing needed on this earth for delight.

It’s really not the end of the world–we’ll be back in a several short months.  But, I’ll miss those rich fireside nights all the same. 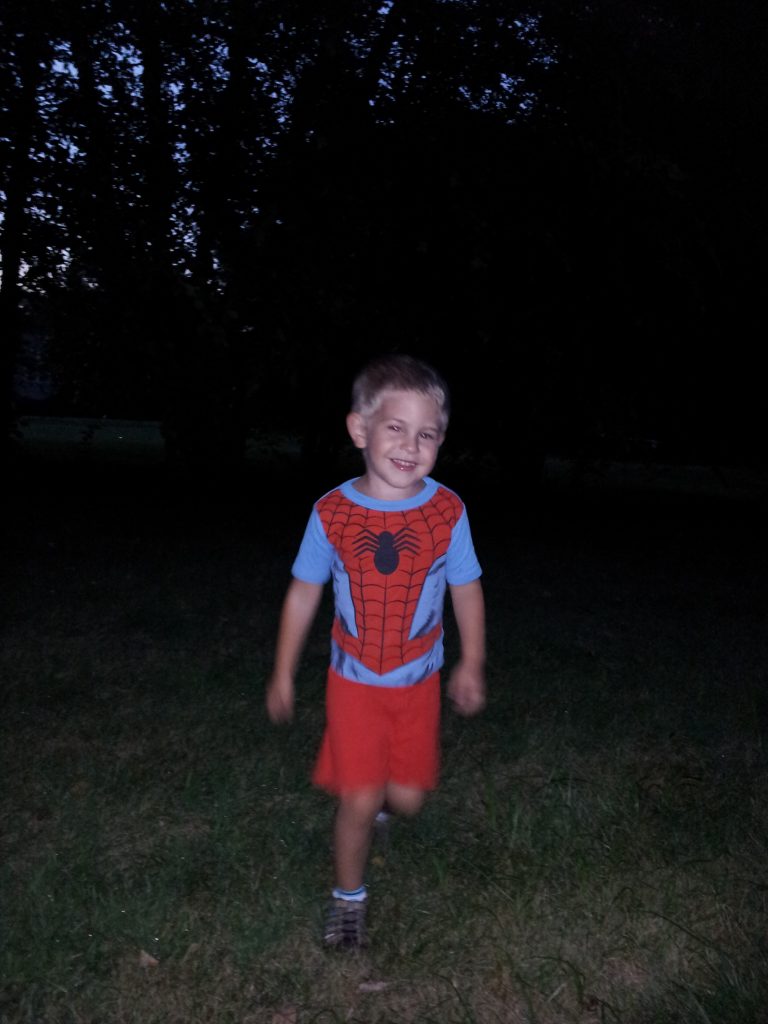 Rocking out the chase in the Spideman jammies