Jen from Life on the SONy Side is such a funny, funny gal.  I roll just reading through the page on her blog where she describes the members of her family.  Yes, coffee and wine are included in that list of loved ones.  In her own words, “Jen is an outspoken lover of all things beautiful and caffeinated. Coffee & Wine are her sister wives…and her husband & son are the limes in her Corona. She’s sharing her groggy and bloggy thoughts on Motherhood and more with anyone willing to listen.  Because just like you, no one listens to her at home…”

I love her because she makes me laugh and sheds such a witty light on this whole parenthood gig.  She has that uncanny knack to make the mundane so very funny, and I’m so glad she agreed to share some of her brilliance here today as part of the Mom of the Year series.

I think that Meredith is basically a genius for coming up with this incredibly clever idea. I am such a great big fan of the way that she thinks, and of her tremendous blog! I’m completely honored for the opportunity to guest post here today!

Moms are the ultimate unsung heroes. We’re super-humans…saints…and sinners…and that’s all usually before naptime. So I’m tooting my own horn today. Loud and proud…even though there are some items on this list that should, in no way, be considered a point of pride, for anyone…ever…but that’s just how I roll. So, with this, I submit my list to “The Academy” for their consideration…The top ten reasons that I should totally be crowned “Mom of the Year”… 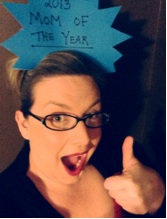 You can create your own version of the “Mom of the Year” look by replicating Jen’s DIY Crown, messy bun, and dark circles under the eyes

1. I hoard coffee, diapers, wipes, and toilet paper as if I’m responsible for filling a family fallout shelter that has yet to exist…allegedly…just so that no one ever sweats the thought of any of these essential items running out at an inopportune time.

2. I regularly forego showers in order to have more hang time with my family. They don’t ask me to…and would probably totally be cool with the idea of me showering more often, but I obviously value a giggle with them more than rocking shampoo-commercial-worthy tresses. (…As if THAT were possible even if I did shower more often. A girl can dream, can’t she?)

3. I let my toddler monopolize 98% of our household television viewing. I can’t tell you the 7-day forecast, but I can tell you when Zoe loses her pet rock, aptly named “Rocko”, on Sesame Street for the 103rd time…this month…

4. I enable his addictions. Honey, I know you didn’t ask Mommy for this life-size replica of Bullseye the Horse from Toy Story…and I know that we don’t have anywhere to put it unless we begin construction on a third story…but I just knew that you’d love to play with it for like 20 minutes before moving on to something else…like a spoon or a hanger.

5. I let my son wear bandages when he isn’t actually hurt because he likes the characters on them. Most expensive stickers ever.

6. I haven’t painted my toes since I was pregnant…but, I believe I recall trimming them maybe once or twice since then…you know…so that people will understand that I’m their wife and mother, and not just some transient bag lady following them around the park.

7. I have allowed my home to be transformed from a fancy Pier 1 advertisement to a Toys R Us catalog in less than 2 years. The Christmas version…just to be clear.

8. I have yet to eliminate a few choice, four-letter-words from my vocabulary yet…you know…the ones that are particularly unpopular in preschool classrooms the world over. I’m fairly certain that I may be at fault for his first trip to the principal’s office in a couple of years. Sorry about that little buddy! If Mama could bang those erasers for ya, you know she would!

9. French fries are his favorite food. He’s terribly skinny, so I’m his faithful dealer…for now. Also, I introduced him to ketchup and maple syrup way before I should have. I’m doing my very best to keep Ranch Dressing top secret for as long as humanly possible!

10. I don’t always correct some of his mispronunciations like I know that I should because, honestly, they sound WAY cuter his way. He’s only this little once! I’m going to bask in the tiny-person-glow for as long as I can!