Kathy over at kissing the frog manages to bring more heart and beauty to her writing than I knew was possible.  Each one of her posts leaves me chuckling a little, tearing up a little (or a lot sometimes–keep those kleenex handy!), and thinking, “Praise God!  Someone else gets this!  I’m not alone!”.   She does this while having gone through some very real pain herself.  She comes from a place of knowing depth and shares this with everyone who visits her blog.  If you haven’t checked her out, you need to her.  Really, go do it right now, and I’ll wait!

Kathy has created a beautiful space where we can all hang out and support each other, laughing a little along the way.  In fact, being “in this together” is exactly what she is writing about here today.  I feel honored that she is sharing this post as part of the Mom of the Year series, and know you all will blessed by read it.  Without further adieu, welcome sweet Kathy, and read on! 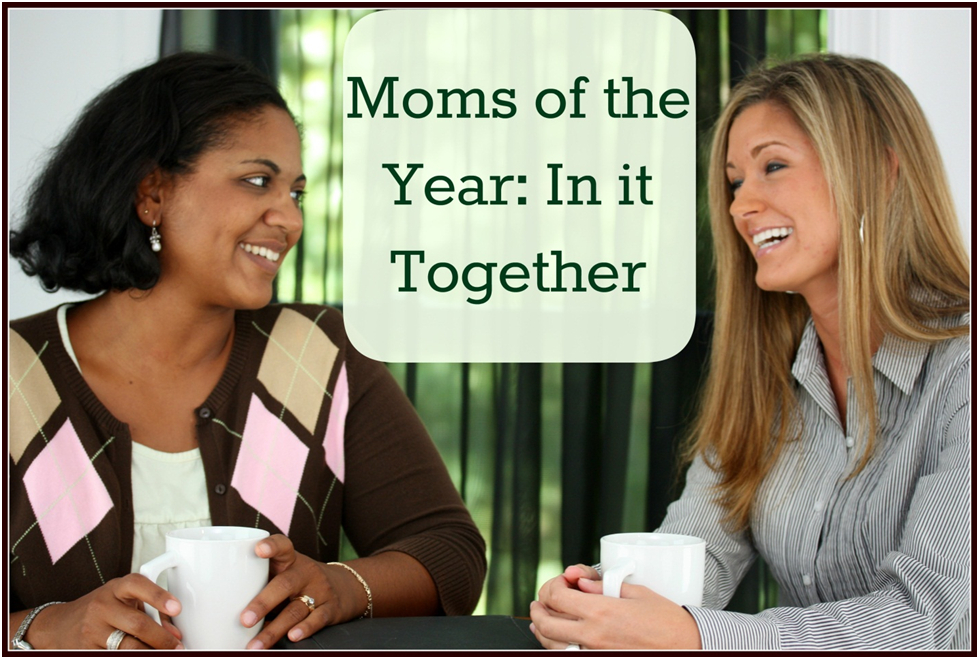 When I first ran across Meredith’s blog, I thought, Wow, here’s a gal who must have it all together if she’s calling herself ‘Mom of the Year.’

The more I read her hilarious posts, the more I realized she does have her stuff together! Here is a mom who has no problem admitting her mistakes – be they craft fails or directional snafus – making us all feel better in the process.

It took me a long time to learn that it is okay to admit I’m not a perfect parent. When Hubby and I were first married at the ripe old age of 31, I wanted to start having babies, like, the next day.

But that didn’t happen; in fact, it wasn’t happening for about a year after our wedding despite our, ahem, vigorous attempts.

Especially disheartening was the fact that everyone we knew kept asking us when we would have babies. Since Hubby has a gazillion nieces and nephews, people naturally assumed we’d start right in. People would say things like, “You’d better hurry if you want to keep up with all of his sisters,” and “Boy, we really thought you’d have a couple of kids by now.” And the ever painful, “I can’t believe you haven’t had a baby yet. I always thought you’d be a great mom.”

Yeah, that was a pretty dark time in my life.

So when my twins finally arrived, I was elated. I knew I was going to be THE Mom of the Year – the best mom – and I was out to prove it!

And at first, I was a super mom. I loved having twins. I hardly remember the really long nights or the times that neither of them could be consoled.

Not that I would admit that anyway. I wanted all those people who kept asking me when I’d have children to suck it. I wanted them to think that I waited to have kids until I knew I could rock it (as far as they knew anyway).

It continued this way until my fourth son was about 18 months old. At that point I had four boys under the age of five. And I was drowning.

But I certainly couldn’t admit this to anyone, could I? After all, I wanted all these kids so close together. So I pretended in public that we were all perfect and happy and everything was good and easy. That I had it all under control.

Then, in April of 2009, one of my twins was diagnosed with an inoperable brain tumor, and I had no choice but to turn to others for help.

Throughout the course of his battle with cancer, and in the years after his death, I have come to realize something about mothers: we all make mistakes, we all have hard days, and we all need help sometimes.

Being a Mom of the Year doesn’t mean that you have it all under control. My goodness, sometimes that’s darn near impossible. You know why? Because life throws us curveballs that we don’t expect. And we have no choice but to figure out how to face them head on, because hiding from them is not an option.

But asking for help is.

I will be the first to admit that many days it feels like nothing is under my control. And I’m not even pretending like it is anymore.

I’m okay with that now, because after finally getting the family that I wanted and through losing a part of that family, I realized that being a Mom of the Year doesn’t mean you’re perfect. It means that you love your family through their good times and their bad, you try your hardest to make them happy, and you know when to admit you’re in over your head and ask for help.

THAT is being a Mom of the Year, my friends.

And that is why I appreciate the moms, like Meredith, who blog about both their successes and their guffaws. It definitely helps to know that we moms are all in this together!