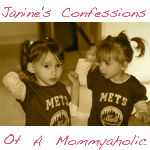 I am so pleased to welcome Janine from Janine’s Confessions of a Mommyaholic today to share why she is declaring her title as a Mom of the Year.  Janine has created a sweet space in the blogosphere where she shares about her life as a mommy to two young girls.  She does it all with hearty dose of reality, love and humor all thrown in to together.  Janine is so dedicated to caring for and supporting other bloggers and I’m so thankful to call her a friend.  I’m grateful that she is sharing her story here today!

What does it take to be the Mom of The Year?  Heck if I know, because on most days I truly feel anything but.

What is it to be a mom in my life?  Well, I started my journey with being a mom back at the end of 2008, when I found out I was pregnant for the first time.  I went on to carry a healthy baby girl for the next nine months and having pretty much typical pregnancy, when my first, Emma was born in July of 2009.  The hospital stay was pretty routine after giving birth vaginally.  She was a perfect tiny little girl and then we brought her home.  The first day was again normal, but that first night wasn’t anything but that.  At around 11 pm, she began to scream and did this for hours on end before settling around 4 am.  My husband and I were clueless, being new parents. And this went on for months on end.  In reality she had colic and her witching hour was late night into the middle of the night.  Many nights, I was up and she and I would finally crash on the couch at an ungodly hour and sleep if we were lucky for 2-3 hours.  It was awful and still not sure how I survived, but we were both in survival mode I suppose.

Just as her colic was winding down and teething was kicking into high gear, I found out I was pregnant with my second daughter Lily. Emma wasn’t even 8 months old when this happened.  By the time, Emma turned a year old, I was already half way down with my pregnancy.  Right after her first birthday, I began having some complications with the pregnancy and ended up being hospitalized overnight and remember being distraught having to leave Emma.  I had never been apart from her overnight before that and my mommy guilt was on overdrive.  I survived to be put on bed rest for more than a month and yet more mommy guilt that I couldn’t take care and interact with Emma as much as I did before this.

If ever I got a crash course in being the mother of two before my second was even born this was it.  I felt like I was being torn in two. Trying to take care of Emma, who was here in the flesh and Lily who was still in utero and needed and depended on me for her very existence and survival.

But somehow, we made it and Lily was born at 39 weeks (term), healthy and perfect.  She was a very easy going baby, who was quite the opposite of Emma as infant with no signs of colic.  But still I had two babies, who needed me and yet again I felt torn many days.

But as my two girls grew, Emma became more even tempered by the day and definitely was a quiet, shy little girl.  Whereas, Lily closed in on being a toddler with more teething for mom to endure and was more vocal, speaking in phrases by 13 months old and by 15 months already exhibiting signs of the terrible twos with her massive temper tantrums.  I swear not a day goes by where something doesn’t piss this child off and she just throws a fit of mega proportions.  And yet, she is so lovable and adorable, too.

Oh and throw in potty training two little girls in less than 2 years time and you got a bit of the picture of my life as a mom.

Through all this, I truly love my girls more than life itself, but do I make mistakes?  Tons and I am not too proud to admit this.  Between, colic, teething, temper tantrums, potty training and so much more I have made my fair share of mistakes.  But this is exactly why I am claiming the Mom of the Year award, because life isn’t meant to be perfect.  We are supposed screw up from time to time, but as my own mom told me, the key is not to make the same mistakes twice.  So, I have tried not follow this one piece of advice, because lord knows I have messed up more times than even I would like to admit.  Have I learned from each mistake?  I would like to think so!

However, I am just a mom, who adores her kids through the good, the bad and horrendous.  From the outside looking in, you probably think that this sounds like a miserable experience, but truth be told this is my life and right where I want to be (I wouldn’t change a moment of it).  And as the Billy Joel song say, “You’re My Home” and that is how I feel about being a mom to my kids.