I’m in love with Downton Abbey.  No secret here, and I promise not to spend the next 7 weeks talking your ear off about my beloved program, but bear with me for one more day as I ride the hype.  It’s just such darn justified hype, so I can’t let it pass by.  And when my pal Keesha over at Mom’s New Stage threw out this post idea, I was on it like O’Brien on a tidbit of scandalous gossip.

If you don’t watch the show?  Just pretend and step into a fantasy world of old school England with me for a minute.  And I’ll try not to judge you–at least too much, because I know you’ve got like, kids and a life and such… 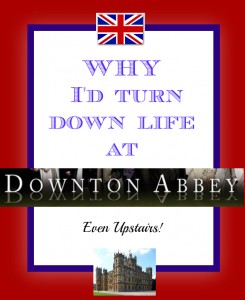 While I pledge my undying loyalty to this blissfully soapy PBS confection, I have concluded that I can’t live there.  So when Lady Mary calls and asks me to move in, I will have to sadly decline.  However could I refuse a chance to shack up with my favorite Brits?

1. I am pretty sure I would die from fan worship of the The Dowager Countess.  Sure, it’s fun for her granddaughters to pretend to be all put out by her fantastically snooty comments, but if I was ever in The Great Lady’s presence, I think I would just be instantaneously overcome by her awesomeness.  As soon as she dropped one of her snide bombs, I would start rolling on the floor in laughter…and never get back up.

2. They don’t bathe.  At least, as far as I recall, there is no reference to this.  I need to bathe.  They are the most well-dressed people I have ever seen.  By well-dressed, I mean that literally, their clothes are put on their bodies very well.  They even have servants designated for this sole purpose, but bathing??  I would be booted out in under a week for my offensive B.O.  Perhaps they just didn’t sweat in the 1920s?

3. I don’t think I would get good cell reception that far out in the country.  This would make it really hard to keep up with my blog.

4.  It would take me all day to figure out the complicated bell system they use to ring for the servants.  Cognitively I get the concept of ringing for help when they need it, but there are so many bells and so many wires.  I would just stand there, staring at the whole contraption, with no hope of ever being able move past my awe and participate in other life activities.

5. I couldn’t afford the presumed “You Break It, You Buy It” policy.  My children would wreak havoc on the place the likes of which Downton has never seen.  Speaking of which, there are no children (okay, fine some miraculously appeared out of nowhere to look adorable in Mary’s wedding, but really, where did they come from?  Smacks blatantly of kidnapping for matrimonial-related purposes in my opinion).  Playdates would be tough and traveling to MOMS Club events in those early automobiles would take forever.

6. Plagues and such would be challenging for me.  I kind of like this life and am just not into such a high premature death rate.  Sort of a soothing quality about our modern-day hospitals.

7.  I’m pretty sure I would haul off and slap Thomas silly within 2 minutes of being in that house, and while the family enjoys its drama, this may be frowned upon…

So while I love my show, I’m going to have to snuggle up on my couch and love on that dear family from across the pond.  And now go check out Mom’s New Stage for her reasons for why she just can’t make a go of it at Downton.  The Abbey life is brilliant, but it’s just not for us…

Thanks for letting me play along, Keesha!