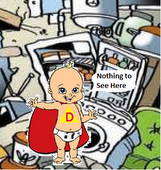 Remember my friend Melissa who let me post over at her very cool blog, Adventures with Captain Destructo a couple of weeks ago?  She’s so funny, she’s real, and she keeps it interesting. Above all, I think she’s great because she always just tells it exactly like it really is. Today she’s going to fill us in on some of the take-aways she’s gotten from her animal science degree. Incredibly useful knowledge for trivia games or for those precious moments when you’re trying to make small talk and can think of absolutely nothing else to say. This info you’ll want to soak up! Laugh and learn, my friends.

Hi all!  This is Melissa from Adventures with Captain Destructo.  Meredith and I swapped posts so now you get to listen to me blather on today.  Sorry for the disruptance in your regularly scheduled reading.  🙂

Needless to say way back when, I went to college and got my B.S. in animal science.  Why you might ask?  Yeah I have no clue.  It surely isn’t a degree that you don’t go further with if you want to land any kind of well paying job.  At the time I thought I would go on to vet school or grad school or something.  I didn’t though and kind of kick myself for this.  But, what that degree did give me is a wealth of useless trivial knowledge about animals.  And that is exactly what I am going to share with you today.  In list format of course because I do like me some lists.

1)  Gregarious is a big word that I like to throw in my convo’s with my husband at times.
It means an animals flocking ability and is used to describe different sheep or goat breeds fairly regularly.  If you want to use it, here is an example.  He sure isn’t gregarious, is he?  This of course was said as Destructo decided to wander away from us in public without a thought to whether we were going to follow or not.

2)  Horses can not throw up.
This is why having a horse is a lot cleaner than having a refluxy baby.

3)  It is hard to do artificial insemination on a pig while slightly intoxicated.
Don’t ask why I know this.

5)  Speaking of chickens, bad eggs float.
This is the most important thing I have ever learned.  Eggs stay good well past their sell by date.

6)  Pigs have the coolest gestation period.
It is 3 months, 3 weeks, and 3 days.  Three is also my favorite number.

7)  Horses can’t kick directly to the side.
Cow’s can.  Hence the reason it is called cow kicking.  No matter what it is called being kicked by either one hurts… a lot.

8)  Fainting goats are awesome.
Look it up on youtube if you don’t believe me.

9)  Armadillos will have identical quadruplets each time they give birth.
This factoid has always amused me to no end.  It also causes me to either approve or disapprove Destructo’s books based on whether the armadillo babies are all the same sex or not.

10)  Red kangaroos are the best mothers in the world.
For real.  They can have a joey which is an older baby that is in and out of the pouch, a neonate baby that stays in the pouch all the time, and a fertilized egg that is just chilling out in a state known as diapause not developing further until the older baby has left the pouch for good.

Their two mammary glands even produce different types of milk.  One is a high calorie, low fat milk for the joey.  The other is low calories, but high fat for the neonate baby.  Kangaroos are one of the few mammal species that will tolerate two different aged babies nursing.

Here is a link if you want to learn more about them.

So now you guys should be able to wow everyone at parties with your useless knowledge and feel super smart when Jeopardy has an animal category.  At least I do.