This is a sponsored post written by me on behalf of VTechKids for SocialSpark.   I received the two dino cars for free in addition to monetary compensation.  All opinions are 100% mine.

When I was asked to review the Switch & Go Dinos, I was especially stoked.  Not only would my son snag a couple of super-cool toys to play with, I’m all about putting the little guy to work!  Yes, get him a job!  And I think “Toy Reviewer” is one that is right up his alley 😉

When the box arrived and we pulled the toys out (Silver the T-Rex and Horns the Triceratops–give them a look.  Which do you like best??), it felt like Christmas morning.  He was so excited! 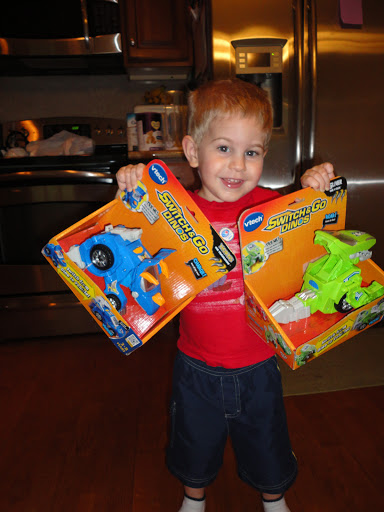 These toys kept him occupied for forever, which is a major bonus in my book.  He woke up from his nap later in the day and immediately requested to start playing with his “dino cars”.  The suggested age range is 3-8 yrs.  He is a young 3, as in his birthday was less than 2 weeks ago, so I think a lot of the interactive LCD screen is over his head right now.  But I really like that there are parts of these toys that he has yet to figure out–this will allow the toys to grow with him and keep his interest.  For now, he loves just switching the toys back and forth between dinosaurs and cars.  Until he figured out how to do this on his own, he kept calling out “Mommy, dino!  Now car, Mommy!”.  He’s now got the switching part aced.  I kept asking him to look up from his play to smile at the camera, but no such luck.  As you can tell from the photo below, he was captivated 😉  So it’s great toy for a kid his age and an added bonus: the cool vehicle and dinosaur sounds held the attention of my 11 mo. old daughter as well!  Major score! 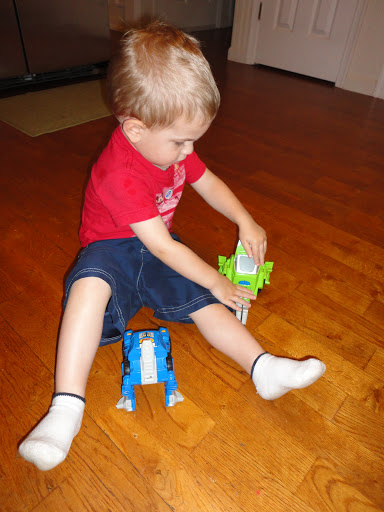 As with most Vtech toys, the intention is for these toys to be educational as well as fun.  From the Switch & Go Dinos, kids learn facts about dinosaurs while they are playing with them.  This is a pretty neat way for kids to soak up some info.  It’s awesome that Vtech does such a great job of making learning fun.

You can buy the four Starter Dinos, Silver the T-Rex, T-Don the Pteranodon, Tonn the S Stegosaurus and Horns the Triceratops now at Amazon (Buy today on Amazon), and on Monday, June 18, they will be available at VtecKids.com.  The price of each dino is $15.99.  In the fall, they will be on-shelf at major retailers and 3 more dinos are being added to the line.

I’m mainly thrilled because these toys solve a dilemma for me.  In the next few months, I think we have about 5 billion birthday parties coming up, and I never know what to buy for kids that are older than mine.  I think these Switch & Go Dinos are a great idea and probably pretty accurately aged for the 3-8 set.  Yay!  Now I’ve got my go-to gift.  And I also have a feeling that some of the other Switch & Go Dinos may be ending up on his Christmas list this year (for the real Christmas on December 25, not the surprise one that just came the second week of June) .  These toys are truly cool–check them out.