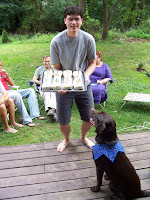 Before we had our human children, our dog, Bailey, was truly our child.  Now that I’ve actually birthed a couple of my own, the dog has become, well…more of a dog.  This does not mean we don’t love Bailey–it just means we may have less elaborate canine birthday parties and less extraneous non-holiday costuming in our home.  Per his report and frequent phone calls I am convinced he makes to the Animal Abuse shelters behind my back, he is completely ignored and neglected.  In actuality, I’m pretty sure most abused and neglected animals don’t enjoy a special large-breed Iams weight-control diet, frequent water bowl refills, daily morning runs and stuffed Kong treats, and their own orthopedic bed.  But I could be wrong.  Since our human children have arrived on the scene, Bailey has started pouting and never stopped, so apparently it is a classic case of the firstborn child being overlooked for their younger, more attention-needy siblings.  Bailey will be accepting any and all sympathy cards directed to his attention.