Anyone who has ever seen and loved National Lampoon’s Christmas Vacation probably remembers when Clark, thoroughly in the throes of fun holiday pandemonium, declares that the family is standing on the “threshold of hell”.  And anyone with kids (and probably most of those without) has had a moment when you truly feel that your life is so insane you are truly on the verge of a very, very dark place.  This weekend was one of those for my family.  Friday night our sweet little boy broke his femur bone in a freak way by twisting weird when he was playing (we think he may have a stress fracture from a fall in the slippery rain earlier last week).  Daddy rushed him to Chester County ER and after waiting up all night, he was transferred to Dupont Children’s Hospital (my new favorite place on this earth–amazing, wonderful place for kids) in the early hours Sat. morning. and was finally set in a hip spica cast which immobilizes him from the chest down for 6 weeks.  He will be unable to walk for 2 weeks after this.  Do the math and know that Christmas morning will be the happiest morning in the world for our family in more ways than one this year. 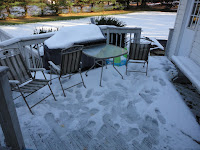 In the midst of this, it started to snow.  Heavily.  In October.  The brand-new awning that we sunk some cash into in the spring is scheduled to come down this coming week so it isn’t ruined by the weight of snow.  That has worked out well for us…next year we’ll play it safe and take it down on July 4. 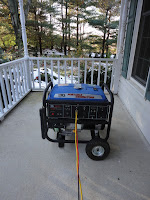 Then our power went out later Sat. morning.  We don’t have cell phone reception at home.  And while my guys were in the hospital, I was home with a 3 mo. old who likes her bottles very warm, and neither of us were crazy about freezing without heat.

Then I lost my wallet Sunday morning, with all the obvious–insurance cards (kind of important right now), driver’s license, credit cards, etc.  A highlight here: I was sobbing to my husband at this point, thinking of all the things that would need to be replaced, when a fresh wave of bawling started up as I realized, “And I’m going to have to get a new library card!”  He just stops and looks at me, “Really?  REALLY?!  A library card?  That’s what you’re worried about now?!?!”  Hey, gotta have my books…;)

God’s timing is incredibly funny sometimes, but it is incredibly good.  With the amazing blessing of my in-laws (who live 2.5 hrs. away, but just happened to have been camping near-by) coming to help, and our pastor’s generator, we made it through the weekend.  The offers of meals, bigger clothes to fit over the cast, bean bag chairs so he doesn’t have to spend the next 6 weeks lying flat, company, babysitting so I can leave the house, help with laundry, toys and movies to occupy him, prayers and general love have left us in tears (and not just when thinking about missing library cards). 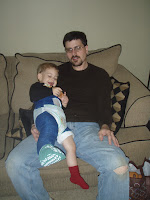 I’m not going to lie–this is going to be tough and I’m scared silly.  My nerves are shot, and I’m obviously not sleeping b/c why else would I be blogging at 3:14am?!?  And when my little man cries for Mommy in the middle of the night and I find him pulling at his cast, unable to sleep, tears rolling down his cheeks and saying “All Done!,” my heart is just about completely broken.  Sometimes it’s a lot easier than other times to say “God is good all the time.  All the time, God is good.”  But He is–good.  All the time.

The power came on yesterday around 1pm, and I picked my son up and ran out to turn off the generator and do a victory dance (there’s some hot mom moves for you 😉 ).  And that missing wallet?  In the laptop bag that my husband and I each checked–three times.  We’re going to be okay…:)

And one more thing, just for fun–is there really anything funnier in this world than dressing up a miserable chocolate lab as a banana split for Halloween?? 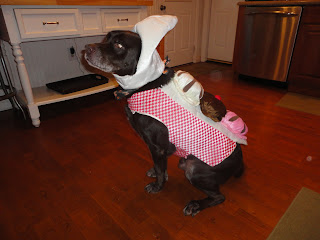 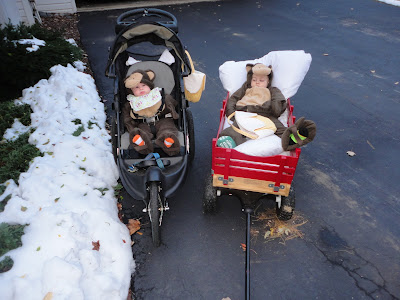