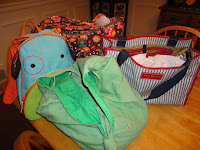 The Mothership is a wonderful Kalencom weekender bag that I purchased soon after I learned I was pregnant with my second child.  When it arrived, my husband about passed out from the sheer size of this beautiful beast, told me I had to return it and has refused to ever carry it.  I love it.  Perhaps an infamous overpacker, I had trouble fitting all the stuff for one child in a normal diaper bag and knew I’d be in trouble when packing for 2 kids in diapers (or let’s be honest, 2 kids at all…).  The vessel is fantastic b/c when I need to drop the kids in respective nurseries/classes somewhere, as I do this morning, I can just break The Mothership down into 3 separate bags for each of us.  We can all happily go where we need to go with our own bags until we return home and The Mothership can be restored.  As a shout out to my husband’s horror, I will acknowledge it’s slightly scary that The Mothership is still largely intact and full, despite me pulling enough out of it to fill 3 other bags. Sort of like the Mary Poppins handbag???  In any case, ah the bliss of having some semblance of organization, albeit in the form a of terrifyingly large pink bag, in the midst of my chaos…chalk up major Mom of the Year points as we trot us out the door this morning 🙂